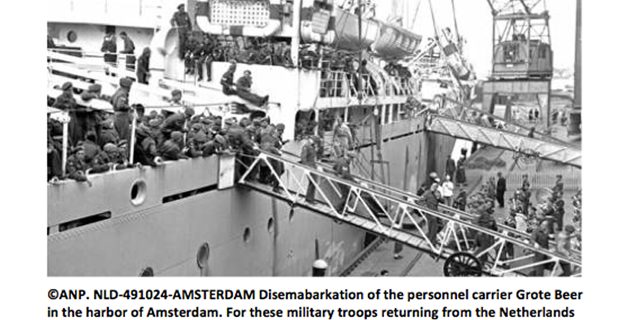 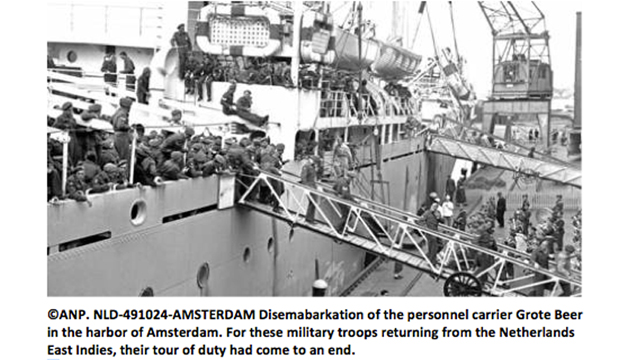 By Lidy Nicolase – March 18, 2014. Translation of Article in the Volkskran.nl

The Netherlands government still owes millions of euros to 380,000 Dutch people who had to flee Indonesia between 1950 and 1970. Banks, as well as insurance companies, also have enormous debts to redeem. A substantial part of life insurance policies and money left in banks that were eventually moved to New York after Japan invaded the former Netherlands East Indies have never been returned to their rightful owners.

Evidence of this will be given in a newly released book by author and journalist, Griselda Molemans’ entitled ‘Opgevangen in Andijvielucht’ (Welcomed with The Smell of Endive).  Molemans’ conclusions are based on the report ‘Netherlands Indies Money and Banking’ of June 17, 1945. This report is in the archives of the Federal Reserve in New York and reveals that the 17 largest insurance companies in the Dutch East Indies, at that time, had sold life insurances worth 251.8 million Dutch guilders.

Many of the insurance policies were never paid because its owners could not prove ownership. The chaos during Japanese occupation and the Indonesian revolution following it, caused their papers to be lost. The same happened with many bank accounts. The Javasche Bank, the central bank in the Dutch East Indies, had secured its gold and assets. According to Molemans, proof of it can be found in the vaults of the Federal Reserve. This is denied by the Association of Insurers. In case of requests, investigations are only done in the Dutch archives.

Part of the money that the Netherlands government owes these people, is made up of unpaid pensions and wages of KNIL-soldiers, Japanese compensation for POWs, civilians and ‘comfort girls’, as well as the compensation Indonesia has paid for war damage. In her book, Molemans focuses on the debts imposed by the Netherlands government on these refugees from Indonesia, for housing and sustenance.

According to Gert Oostindië of the Royal Institute of Linguistics and Anthropology (KITLV) in Leiden, the claim on insurance policies and bank accounts are new. KITLV is one of the institutions which insist new research on the colonial war should take place. Oostindië states that, “In the 80s, the other claims were an important stimulant for people from the Dutch East Indies to get organized. Though some recognition and compensation were achieved, it never reached its full extent.”

Joining forces led to formation of the Indisch Platform. Its president, Silfraire Delhaye, confirms that the Netherlands still owes a huge debt in compensation for war damage. “We are in talks, although it is becoming increasingly difficult. Many things have been swept under the carpet. Quite a few policies and bank balances went somewhere else than to its right full owners. We don’t know the cause. In that respect, openness and knowledge are valuable assets.”