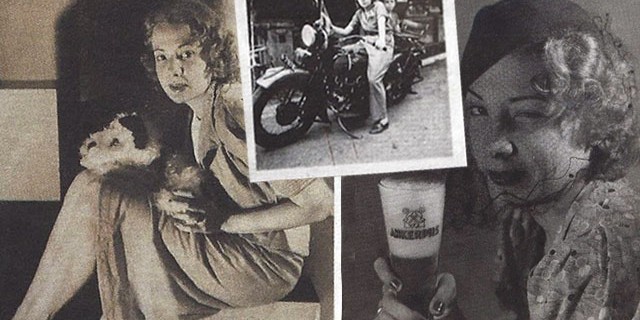 First Published in The Underground The Hague, Edition#4 May/June 2015

Smiling seductively as she winks playfully at the camera, the fresh-faced image of Dido Van Soest betrays little of the audacious woman underneath – the young, charismatic model turned resistance fighter, whose life would ultimately end in tragedy during the devastation of World War II.

Growing up in the former Dutch East Indies (now Indonesia), Dido was known as something of a social darling before the war. Famously known as the face of ‘Anker’ beer, her image was instantly recognisable across the capital Batavia, now known as Jakarta. But despite her delicate outward appearance, Dido was far from tame. As her son Steph van Soest explains, she was a woman who was simply ahead of her time. “My mother was a bit different, she was almost too pretty, too smart and too controversial.” He continues: “She was known for riding a motorbike, at a time when women just didn’t do that. She was part of the Batavia motor club, one of only two women members, out of 80”.

As Steph tells it, she truly lived up to her nickname ‘kid’. She would whistle for cabs and scale walls in her ballgown in order to avoid queuing up to get into parties. Steph explains: “It was just not done in those days, but she did it”. Her life, from the outside, seemed a charmed and rarified one. Married at 19 to the wealthy Tom van Soest, a radio technician from a well-to-do family, Dido and Tom were part of a privileged social class – members at all the right clubs and seen with all the right people. But all was not as it seemed. The marriage was not in fact a happy one and their lives were soon to be turned upside down by the Japanese invasion of the Dutch East Indies in 1942. “She knew that war was coming to us, even though my father was in denial about it”. Most of Steph’s information about his mother comes from two diaries she wrote. The first written in 1939 when she was pregnant with Steph, addressing her entries to the unborn baby. The second diary was written six weeks before her arrest and capture by the Japanese in August 1943.

From the outset, says Steph, it was clear that Dido would take action if war came to her door. “She was very determined, she wrote in her diary that no one would ever hurt or threaten me and that she would fight, even if it cost her blood. And four years later it did.” True to her word, Dido joined the resistance movement around June 1943, after being approached by a friend at her tennis club. Led by former Dutch army officers, the resistance movement was small, consisting of around 42 cells – approximately 200 or so people.

Part of a cell of five people, Dido would meet members in a secret house three or four times a week, without her husband’s knowledge. According to Steph, her work involved observing troop movements, looking for equipment and weapons and intercepting mail. But, despite her brave decision to join the resistance, it was an operation inevitably doomed to failure. “They (the resistance movement) had a transmitter where all the information collected by the resistance fighters was sent to a ship, a ship they thought was American. But it was Japanese. Within three months, the whole resistance was brought down, the members arrested and sentenced to death.”

Only eight weeks after joining, both Dido and her unwitting husband were arrested by the Japanese secret police and taken away for interrogation. Steph was four-years-old at the time. “The Japanese where very cruel, and my father, he was tortured terribly. After five or six weeks of this treatment, when they were confident he was innocent, my father was released”.

Despite their separation and ongoing torture in prison, Steph’s parents still managed to remain in contact, with the help of an unlikely ally. “One warden felt sympathy for my parents, and at risk to his own life, would pass information to my father about my mother.” The last time his father heard from Dido was two days before his release. “The warden handed him a piece of soap, and in it my mother had written with her nails ‘Tom, I love you.'”

The family would never hear from Dido again. Sentenced to death and executed, Dido was beheaded by samurai sword on the 13th December 1943.

“Many years later I met one of the people who lived through the war and I was told that my mother was one of the toughest and bravest people they knew,” says Steph. “The things no-one else wanted to do, she would. That was her attitude.”