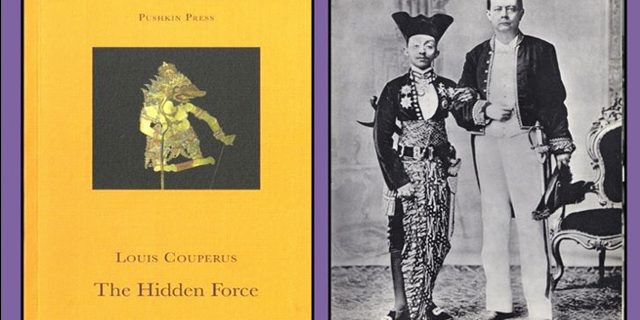 Louis Couperus was one of the few Dutch writers to become fairly widely known outside Holland. His great novel ‘The Hidden Force’, (‘De Stille Kracht’), which is set in the Dutch East Indies, has been translated into English and is available from Pushkin Press.
The description on the inside jacket reads:
“A mystical Javanese prince and a promiscuous wife are the twin challenges to Dutch Commissioner Van Oudijck’s seemingly impregnable authority. As he struggles to maintain control of his district and his family, ancient local traditions reassert their influence, and colonial power begins to disintegrate.”

The picture on the right wordlessly captures something of the strange and alien relations between East and West: the Soesoehoenan of Soerakarta Pakoe Boewono X stands arm in arm with Commissioner De Vogel, who is lording it over his people and land. Couperus in his novel has one of his characters say that the Soesoehoenan is like a living ‘Wajang-doll’

This is the first of a series of new movies and tv-series we will be introducing. The films and documentaries are now available to the English speakers with added English subtitles provided by TIP friend Ben von Stockhausen. The theme is around people with roots in or a connection with the former Dutch East Indies.

The Hidden Force (de Stille Kracht)  is a 1900 novel by the Dutch writer Louis Couperus. The narrative is set on the island of Java in the Dutch East Indies. The book was adapted into a 1974 Dutch TV serial. In 2010, a feature-film adaptation was announced as under development with Paul Verhoeven as director.

Part 1:  1974 AVRO TV play of the novel by Louis Couperus (1900) of the Dutch colonial society in the former Dutch East Indies featuring Bob de Lange and Pleuni Touw, now in her 80ties. Also playing in a roll the famous Javanese story teller and dancer Indra Kamadjojo.