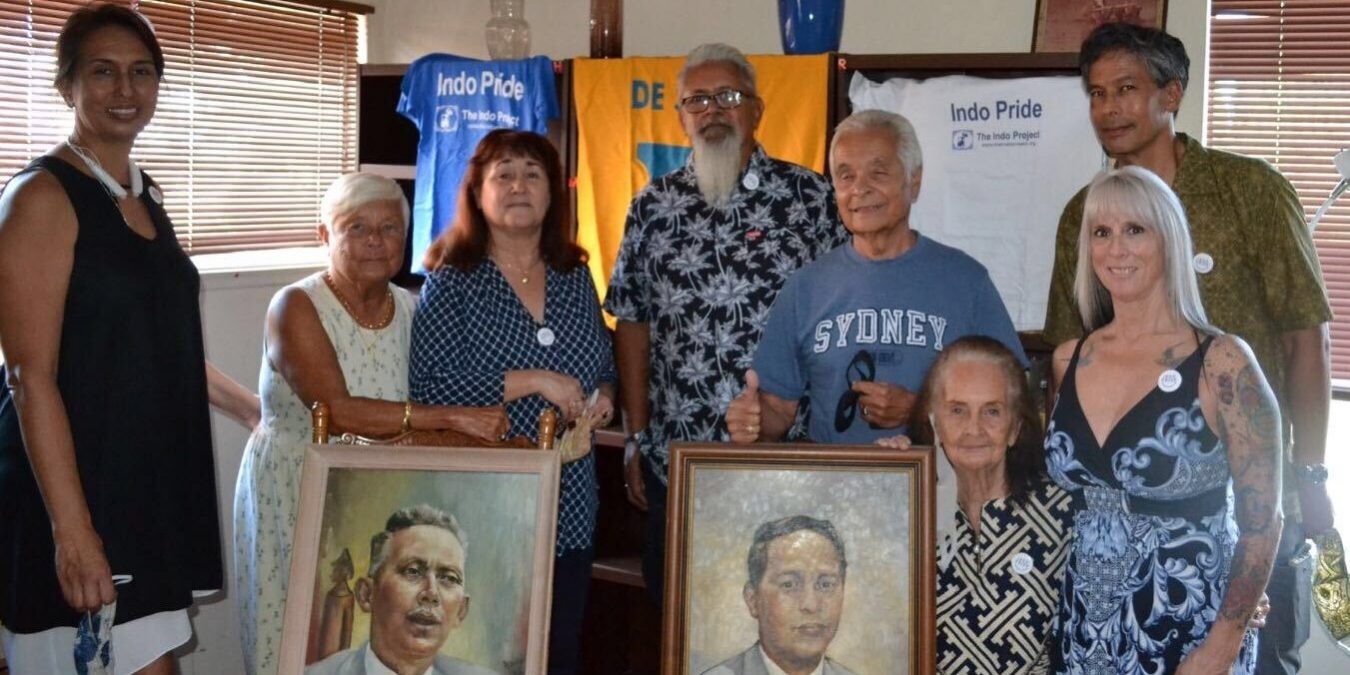 Throughout so many years, back from the sixties, anyone visiting René Creutzburg’s home would see these two paintings created by Hado Benjamin on the wall of the famous Indo Creutzburg’s library.  After René Creutzburg’s passing last May, Moesson magazine in The Netherlands was very interested in the paintings so that they can display them together in the Moesson headquarters.

Due to the kindness of the Creutzburg family heirs, they agreed to offer both paintings and allowed The Indo Project to facilitate this exchange transaction (see TIP team photo of August transaction that includes Franz & Traci Creutzburg, oldest son of René with wife).  Please see photo of this transaction.

TIP Chairwoman, Priscilla Kluge McMullen had a planned trip to The Netherlands to attend the multiple Herdenking events and was able to hand-deliver the paintings to Vivian Boon/granddaughter and new Moesson editor-in chief.  Please see the photo of article printed in the October Moesson issue in Dutch and here we have the English translation.

The Indo Project and Moesson sincerely thank the Creutzburg family for their unselfish donation of these paintings so they can continue to have a memorable and historical display for all times for many to see.

In the sixties, when Tjalie Robinson and his family lived in California, he and René Creutzburg became friends and worked closely together. The two men shared the conviction that the Indo-community should unite and keep the Indo-European culture alive.

It was in that period that René Creutzburg started with De Indo, the small monthly magazine that was very well known and read not only in California, but worldwide. Creutzburg passed away in May of this year. For 57 years he was the driving force behind De Indo – unfortunately now that Cruetzburg is no longer there to publish it, De Indo’s last edition has been published.

Over the years, René Creutzburg has put together a large collection of books about Indo-European culture and history. In his library he had two portraits: one of himself, one of Tjalie Robinson. Both were painted in 1966 and signed by Hado.

René Creutzburg’s children have generously donated the two paintings to the Stichting erfgoed Tjalie Robinson in Almere, the Netherlands. This foundation wants to safeguard the Indo-European cultural heritage for the next generations. The digital archives of Moesson magazine and the Moesson library are part of the foundation. Moesson is thé magazine for and by the Indo-European community and was founded in 1956 bij Tjalie Robinson.

‘I am so grateful that the heirs of René Creutzburg donated these lovely paintings to the Stichting erfgoed Tjalie Robinson’, Vivian Boon says. ‘The portrait of René Creutzburg will always remind us of his important work and his neverending love for the Indo-European community. The portrait of my grandfather now hangs on the walls of Moesson, the magazine he was so committed to and the place he loved so dearly.’