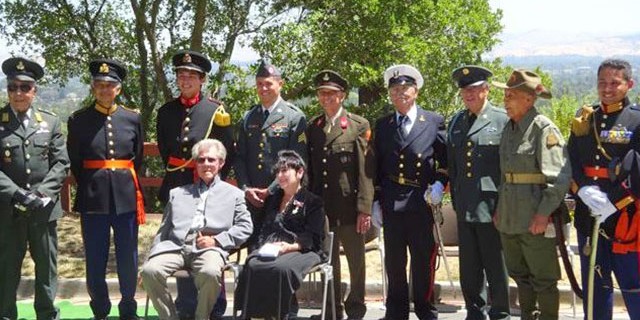 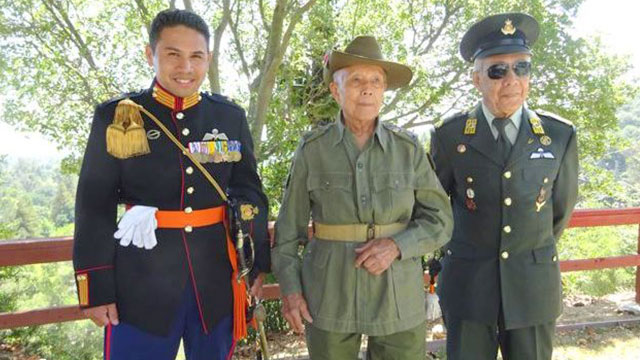 The following speech is by Jesse Eijsbroek,  given at the commemoration ceremony in San Francisco on August 2nd, 2015:

In June of 1942, the Japanese Empire launched an ambitious military logistics project to connect the existing railways between Bangkok, Thailand and Rangoon, Burma. The line was considered difficult—navigating through hilly jungle terrain and around many rivers. Over 60,000 allied POW’s were forced into labor for its construction. Conditions on The Railway were horrific. Nearly 18,000 of the allied POW were Dutch-KNIL service men from The Netherlands-Indies: 2,782 Dutch POW’s did not survive due to disease, starvation, beatings, and execution.

This is the story of my grandfather, Nicolaas Michel Feijaerts. This is also the story of many Dutch POW’s, from the Netherlands-Indies, who were forced to work on this deadly railway.

My grandfather was the oldest of three boys. His father was a KNIL regular, of Dutch-Belgium origin, and his mother was from Palembang. Though raised in a VanderSteur orphanage in Tjimahi, he had as he recalls a beautiful and unconcerned childhood. He spent most of his days in nearby Bandoeng. It was the mid 30’s, the glory days of The Garden City, which was about to become the residence of The Netherlands-Indies administration or as some called it the Paris of Java—where luxurious hotels, administration buildings, stores in art deco style, and decadence could easily be found.

After the fall of Pearl Harbor and Singapore, The Royal Netherlands-Indies Army (KNIL) realized that an invasion by the Japanese Empire was imminent. Although the KNIL outnumbered the Japanese taskforce, the Japanese were better equipped, trained, and experienced in new tactics and open warfare. While the KNIL had a few regulars, most of the KNIL were draftees and conscripts of Indo-European descent and European internees from the local militias. During the grand mobilization, my grandfather was drafted at the age of eighteen as landstormer and assigned to the 4th Infantry Regiment. Together with the 9th Infantry Regiment and the 7th Mountain Artillery, they were deployed and positioned on the northern plains near Tjiater just north of Lembang in order to defend the city of Bandoeng against the Japanese invading from the north. While in position, news arrived about the landing of another Japanese taskforce advancing towards Buitenzorg. Local regulars started to desert in large numbers, throwing away their weapons. The large gaps in the defense line and the shortage of manpower made it easy for the Japanese Imperial Forces to quickly seize the city of Bandoeng. In order to demonstrate their superiority, several KNIL officers were executed on the spot. My grandfather, along with the remaining 4th and 9th Infantry’s, was imprisoned at the Tjimahi barracks.

In October of 1942, the POW’s were transported by train to Batavia and then Tandjong Priok in order to be shipped to Singapore. The Japanese Imperial Army used cargo vessels to move the POW’s to Singapore. The conditions on these vessels were horrible. Some 3,500 to 5,000 POW’s were stacked in cargo bays with no sanitation or medical care. The vessels were not marked as POW transport according to the Geneva Convention so they only could be identified as Japanese naval logistics vessels and risked attacks by allied submarines—which happened on several occasions. In five shipments, a total of 18,000 POW’s were transported to Singapore to become a part of the labor force at The Railway (in addition to the remaining men from Blackforce and the USS Houston, most of the prisoners were Dutch). Next was a five-day journey in rice wagons, 50 POW’s per wagon, to Thailand. There was no place to sit or to lie down. They’d take turns to sleep. There was no fresh air, no daylight, no sanitation, and water and food were scarce. Inside, temperatures would easily rise up to 120F. After the journey, most were weakened both mentally and physically. Medical treatment was denied and some already suffered from dysentery and cholera. In order to get to the railway dispatch camp at Non Pladuk, POW’s were forced to make a 100-mile walk.

The entire railway line was divided in several sections. Each section had its own workforce. My grandfather was sent to Tamarkan, which is the Kanchanaburi section next to the Kwai Bridge River. The Japanese Imperial Railway set a two-year deadline on the project, which required a large labor force. The regime was barbaric and cruel. Beatings and punishments happened every day. As my grandfather recalls, the Korean guards exceeded the Japanese in cruelty and inhumanity.

In order to connect the railways, the rocky soil needed to be leveled throughout the hilly terrain and numerous of bridges had to be built over the rivers. The cutting and leveling was done by hand, and to build the bamboo bridges the workers had to stand in the water for hours. Cutting the rocky soil made numerous of wounds on hands and legs risking infection. My grandfather showed me the numerous of scars he got on his lower legs inflicted by the rocky stones at The Railway. “This one over here almost got me killed” he said, referring to a large scar on his left shank. It got infected and we didn’t have any antibiotics.

The POW’s were on their own, since few knew about their conditions or whereabouts: there was only the jungle, The Railway, and a handful of rice a day. While The Railway was completed in 1943, most of the workforce remained for maintenance and repair. Allied bombers increased their raids on The Railway after the completion in order to cut of the supply route for the Japanese Imperial Army. Primary targets were the bridges like the one crossing the Kwai River. As my grandfather recalls,

“I was lucky that day. I came from the bridge and we were carrying bamboo next to the line. I heard the heavy sound of their engines and saw the bombers flying in, hatches open, low and fast. The bridge area was hit. I felt so lucky that I just had left the bridge area”.

Soon after, the Japanese Empire surrendered. When the POW camps were liberated, the world learned of the devastating horrors at The Railway of Death. Victory over Japan was celebrated but all my grandfather wanted was to return to his beloved Bandoeng.

The KNIL was in urgent need of troops in order to disarm the 70,000 Japanese forces in The Netherlands-Indies. Most of the men were forced into labor elsewhere and only a few men were in labor camps on Java. This meant that all Dutch POW’s were medically evaluated and if approved, sent back into service. Training started immediately in Thailand and the new KNIL army unit Java Echelon 1st Infantry battalion used a red elephant for their mascot—known as the Gadja Merah. By then, reports were coming in from the homeland about skirmishes, clashes, and a radioed message of Indonesian Independence that went throughout the country. There were riots and fighting in the major cities between occupational forces and Indonesian youngsters, attacks, robbery’s, and massacres aimed at European internees and Indo-Europeans.

My grandfather and his fellow soldiers became eager to leave for Java. While the battalion sets off for Java in December of 1945, it takes them until March of 1946 to set foot in their beloved Indies. The Gadja Merah battalion and the Stoottroepen battalion from Holland were assigned to restore order in the Bali-Lombok region. Although the men of the Gadja Merah battalion had suffered, they were able to distinguish themselves and impressively achieved all their military goals. By October of 1946, the reorganized 1st Infantry battalion, now called X and XI Infantry battalion Gadja Merah, had been reassigned to restore order in Palembang region. My grandfather did not return to his beloved Bandoeng until 1947. He had been reassigned to the ML–KNIL, the KNIL air force, at Andir airbase just west of Bandoeng. However things weren’t the same anymore. The city had changed. The world had changed. My grandfather had changed. And soon Bandoeng was about to become Bandung.

My grandfather was a wonderful man. Overcoming tragedy, he found the strength to share his good and bad memories with his grandsons. We had the opportunity to learn about him and what forces shaped him over the course of his life. Learning about his story, we learned about our history and culture. All his sacrifice, so one day I could understand our shared culture and identity—so I could understand myself and my identity. 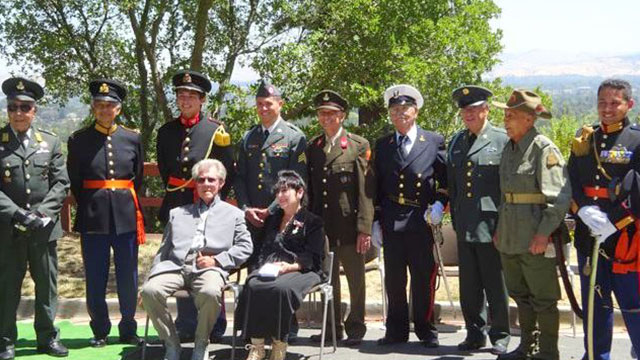 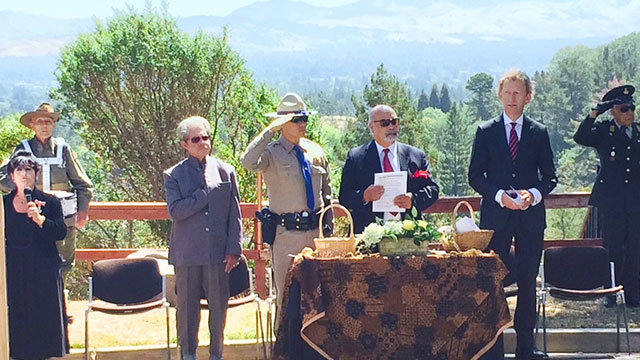 From left to right back: Willy Welcker, Jopie Ketting-Olivier