Commemorating and Celebrating May 4 and 5 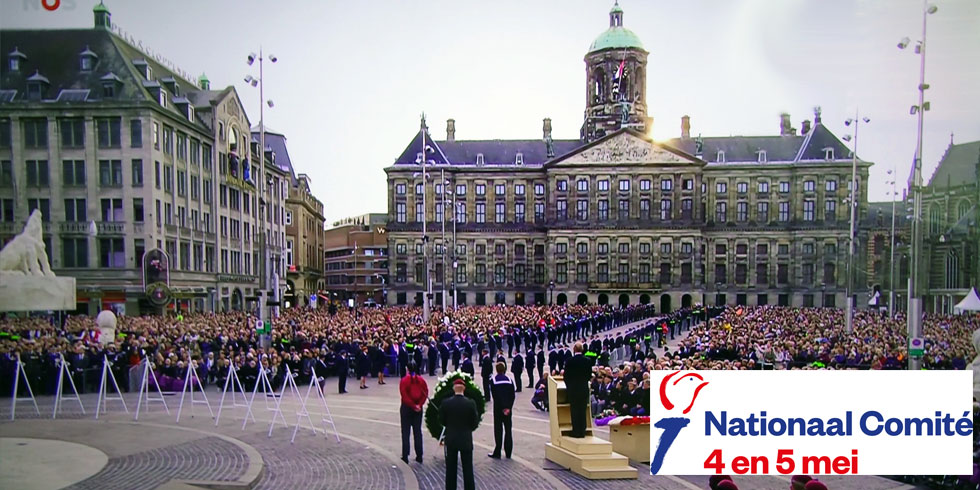 On May 4th the Netherlands commemorates victims of war; on May 5th the people celebrate the fact that they live in freedom. The National Committee helps determine how meaning is given to commemorating and celebrating the memory of the Second World War.

The national observance of Remembrance Day in the Netherlands takes place on May 4th, at 8 pm. At that moment, two minutes of silence are observed to commemorate Dutch victims of war. Public transport and road traffic essentially come to a standstill throughout the whole country. A commemoration ceremony is held in Dam Square, Amsterdam in the presence of the head of state and various representatives of both the Council of Ministers of the Kingdom of the Netherlands and the Dutch Parliament. This national observance of Remembrance Day is held simultaneously with local commemoration ceremonies in nearly every town and city in the Netherlands.

His Majesty King Willem-Alexander and Her Majesty Queen Máxima attended the memorial ceremonies. (1)

A wreath was laid on Dam Square during the National Remembrance Day for all civilians and military personnel—who were killed or murdered in Southeast Asia during or immediately after the Second World War, and the colonial war in Indonesia as a result of resistance, internment, violence, exhaustion, hunger, and forced labor. It is only since 2019 that the Dutch Indies are mentioned specificly.

Joost van Bodegom and Isabella (Jessy) Keasberry-Chevallier and their granddaughters lay a wreath for the civilians who died in Asia. From 2005 to 2010, Joost van Bodegom was chairman of the 15 August 1945 Commemoration Foundation in The Hague and was a member of the National Committee for 4 and 5 May in Amsterdam for six years. Isabella (Jessy) Keasberry-Chevallier is a retired proprietor of the once renowned Indonesian restaurant Djokja in Amsterdam and mother to Chef Jeff Keasberry, who serves as the vice-chair on The Indo Project board.

Ditte, a granddaughter of Joost van Bodegom, former chairman of the National Commemoration Foundation on 15 August 1945, spoke the following words:

“Both my grandfathers survived the Japanese concentration camps and then the Bersiap. My grandfather Willem is unfortunately no longer alive today my grandpa Joost is laying a wreath and then think of all the innocent civilians killed in Asia in World War II and after I am aware of it through the stories of my grandfather that passing on and continuing to commemorate are very important.”

“My grandmother’s father and uncles survived the Japanese internment camps. She, with her mother, was barely able to survive outside the camps. In memory of all those who suffered during the Second World War and died in the Dutch East Indies and areas in Southeast Asia, she lays a wreath today. Also, so that we remember the sacrifices they made, and that we should never take our freedom for granted.” (2)

Each year, the celebration of Liberation Day is brought to a festive close with the Fifth of May Concert on the River Amstel in Amsterdam. (3)

In contrast to the other, exuberantly celebrated Liberation Day, on which Dutch celebrities fly by helicopter from festival to festival (5 May), on 15 August there is a grave atmosphere. Instead of the liberation, the victims of the Japanese occupation in Asia are commemorated and a world that no longer exists: the Dutch East Indies.

August 15 is sad not only because it could have been a holiday for a country that no longer exists, but also because the day was the prelude to four more years of chaos, war and an ultimately painful expulsion and repatriation.

The liberation in the Indies was nothing like that in the Netherlands. No jeeps with Americans and Canadians who were embraced by a grateful population. After all, in the words of Rudy Verheem, it was a ‘liberation without liberators’. Apart from some military bases on remote islands, there was no allied force in the colony yet and Java was one big black hole. (4)