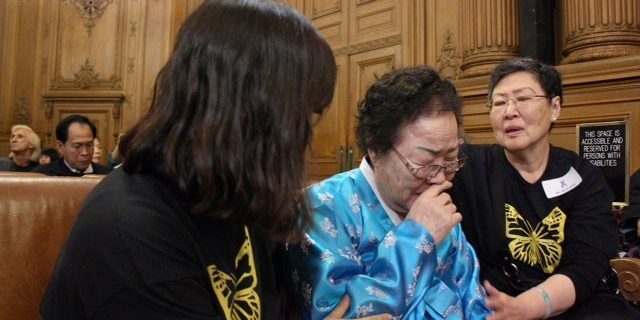 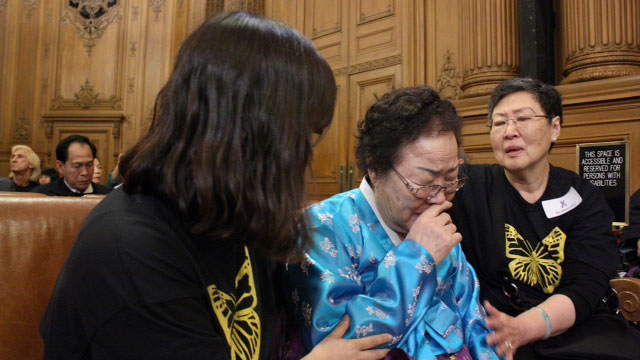 When former Korean comfort woman grandma Lee made the trek to San Francisco in a special hearing on building a comfort women memorial in San Francisco, and she had the grace and courage to tell her story, which was an effort at peace and progress as she was implying that the crimes are hard to forget but that the people should no longer be linked to the crimes of more than 70 years ago, the Japanese lobby disgraced itself by saying that she was lying.

Comfort women around the world (Indonesians, Koreans, Chinese, Dutch, Filipinos, Taiwanese—200,000 or so in total) did not speak up until the 1990s. Their silence had been self-imposed, for how could you tell your husband or your children that at age 16 you were taken to a brothel where Japanese soldiers lined up to rape you and humiliate you to such an extent that pushing it away was safer than to disclose this nightmare to friends and loved ones?

San Francisco made history today (September 22nd, 2015) because outside of Southeast Asia, it is the first major American city to approve such a memorial even though, clearly, the location of the conflict relating to the comfort women was in Asia, and not in California. It speaks to San Francisco’s worldliness and sensitivity to human rights, to build a memorial that will not only be a reminder of war atrocities of the past, but will also give Americans the opportunity to use the memorial for education, not just about the war but about the oppression of women in any conflict, as well as the continuing and horrible reality of women trafficking and the sex trade worldwide.

I was tremendously moved by the session today at San Francisco’s City Hall where Supervisor Eric Mar thanked grandma Lee for “changing San Francisco”. The Koreans were represented and so were the Chinese. I was there on behalf of The Indo Project and wondered, truly wondered, why no one of the Dutch Consulate, based in San Francisco, had bothered to come and show support of this issue (however quietly and diplomatically), which also affected many Indo Dutch women and of whom the Dutch government holds the testimonies in its archives, even though these are still considered “classified information”.

In light of Japan’s continued denials about the comfort women issue (as well as the character assassination of the comfort women themselves by Japanese conservatives) these testimonies need to be made public, and anonymously if necessary, for it is the burden of proof that some, in Japan, still deny, in spite of credible survivors like grandma Lee.

Or maybe I should simply ask why the Netherlands, an enlightened country with human rights high on its national agenda, and a country that was so heavily involved in the war in Indonesia, has done so little for the victims of WWII? That San Francisco had to lead the way, without any support from The Netherlands is painful evidence of where we, descendants of victims of the war in Indonesia, stand when it comes to recognition, understanding and respect.