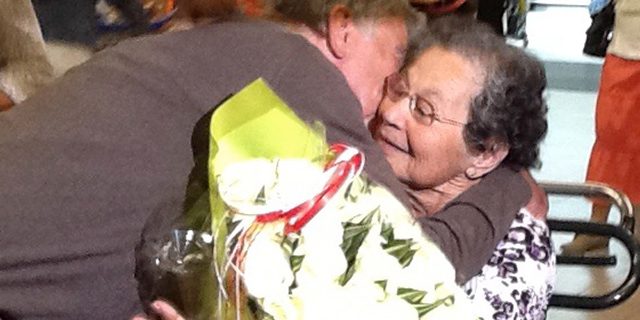 Willem Nijholt’s childhood, like Ilse Evelijn Veere Smit’s, was cut short when the Japanese invaded his homeland, the DutchEast Indies. Like Ilse, he survived the war years in a concentration camp and the revolution that came after.  Like Ilse, he repatriated to the Netherlands and built a new life. But Willem never forgot his childhood friend, the next door neighbor who danced with him in the school program, who made doll clothes from his mother’s sewing scraps, and who helped him plait flower garlands for her hair.

I bet you’ve already guessed it – Ilse was the childhood friend. Through End the Silence and the reach of social media, Willem found Ilse, and the wheels started rolling toward a reunion. First, Dorothy Read was their email intermediary. Then they wrote letters to send across the ocean. And on August 11, 2013, Willem met Ilse at Amsterdam’s Schipol Airport.

The reunion did not go unnoticed. Willem has been a beloved entertainer in the Netherlands for decades. The press was on hand, along with a crowd of Willem’s fans. You can watch the reunion at http://www.telegraaf.nl/prive/21802771/__Willem_Nijholt_herenigd_met_jeugdvriendin__.html–all the better if you speak Dutch!

What a story! We will keep you posted on new developments. 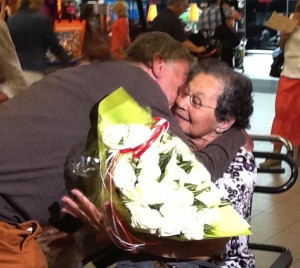 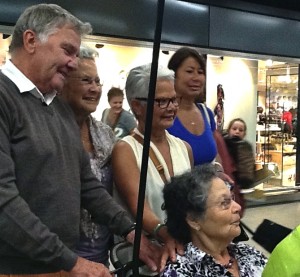 Willem and Ilse’s sisters Marijke (next to Willem) and Edith (the baby in End the Silence) join Ilse to “meet the press.”