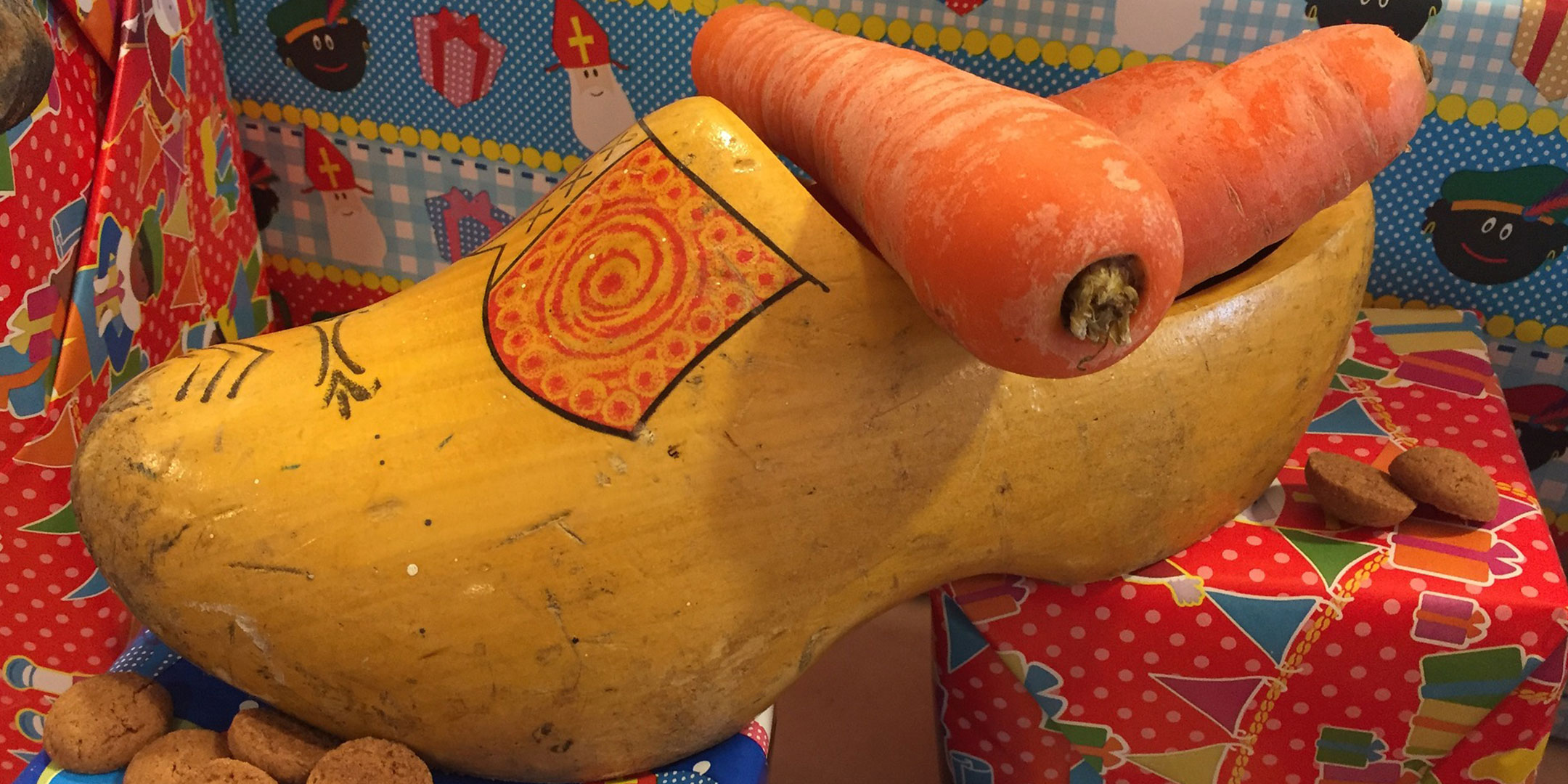 Sinterklaas or Sint-Nicolaas  is a legendary figure based on Saint Nicholas, patron saint of children. Other names for the figure include De Sint (“The Saint”), De Goede Sint (“The Good Saint”), and De Goedheiligman (“The Good Holy Man”) in Dutch.

The feast of Sinterklaas celebrates the name day of Saint Nicholas on 6 December. The feast is celebrated annually with the giving of gifts on St. Nicholas’ Eve (5 December) in the Netherlands and on the morning of 6 December, Saint Nicholas Day, in Belgium. The tradition is also celebrated in some territories of the former Dutch Empire,  like the Dutch East Indies (see image of Sinterklaas in Malang below and Suriname).

Sinterklaas is one of the sources of the popular Christmas icon of Santa Claus.

Sinterklaas is based on the historical figure of Saint Nicholas (270–343), a Greek bishop of Myra in present-day Turkey. He is depicted as an elderly, stately and serious man with white hair and a long, full beard. He wears a long red cape or chasuble over a traditional white bishop’s alb and a sometimes-red stole, dons a red mitre and ruby ring, and holds a gold-coloured crosier, a long ceremonial shepherd’s staff with a fancy curled top.

He traditionally rides a white horse. In the Netherlands, the last horse was called Amerigo, but he “retired”.  Sinterklaas carries a big, red book which records whether each child has been good or naughty in the past year

In the traditional celebration, Sinterklaas is assisted by Zwarte Piet (“Black Pete”), a helper dressed in Moorish attire and in blackface. Zwarte Piet first appeared in print as the nameless servant of Saint Nicholas in Sint-Nikolaas en zijn knecht (“St. Nicholas and His Servant”), published in 1850 by Amsterdam schoolteacher Jan Schenkman; however, the tradition appears to date back at least as far as the early 19th century. Zwarte Piet’s colourful dress is based on 16th-century noble attire, with a ruff (lace collar) and a feathered cap. He is typically depicted carrying a bag which contains candy for the children, which he tosses around, a tradition supposedly originating in the story of Saint Nicholas saving three young girls from prostitution by tossing golden coins through their window at night to pay their dowries.

The figure of Zwarte Piet is considered by some to be racist. Since 2013, the traditions surrounding the holiday  of Sinterklaas and especially Zwarte Piet, have been the subject of a growing number of public debates, editorials, documentaries, protests and even violent clashes at festivals, organized by the movement Kick Out Zwarte Piet (KOZP). Due to new insights but also under pressure, from fear of being labeled a racist, more corporations are removing the figure of Zwarte Piet.  More large cities and national television channels are celebrating the arrival of Sinterklaas with a more ‘evolved’  Zwarte Piet character, with soot smudges on the face rather than full blackface, from delivering gifts through the chimney. This side-kick of Sinterklaas is also referred to as roetveegpiet (“soot-smudge Pete”) or schoorsteenpiet (“chimney Pete”). Outside of The Netherlands,  like in the US for instance, the Dutch schools celebrate with “Rainbow Petes”, who have different colored faces.

Nevertheless, Sinterklaas remains a popular holiday in the Netherlands.

In the days leading up to the 5th of December, children put their shoes in front of the fire (or the radiator) in the hope that Sinterklaas will fill it with a small present or a chocolate goody. Some children think they can get around the Sint by leaving a carrot for the bishop’s horse, accompanied by a wish list. In the olden days a disobedient child would find a potato in his/her shoe but these days this is deemed too traumatic.

Another Sinterklaas tradition is the so-called surprise – or extremely elaborately wrapped up and disguised present. This will plunge households into a frenzy of creativity and closed doors. These gifts are also accompanied by a personalized poem. Once Sinterklaas is actually in the country, the fun can begin. Sinterklaasavond, the night of December 5th, is usually celebrated with family and/or friends. Little notes bearing the names of the participants are drawn some time beforehand and – another very Dutch tradition – an agreement is made about how much will be spent on the presents.

Sinterklaas is a feast primarily for children but make no mistake: it’s also an annual grudge fest for grown-ups. People all over the Netherlands are rolling up their sleeves and licking their pencils to have a go at their siblings and friends via another great Sinterklaas tradition: the poem. The poem, which should rhyme and is read out loud by the recipient, is often used as way to score points and take public revenge on your fellow party-goers. As a parent, it is a great way to remind your offspring of the importance of cleaning their teeth or being nice to their siblings. However, be aware that you may get a poem pointing out that your Dutch accent is crap or you drink too much.

Sinterklaasliedjes, or Sinterklaas songs, are sung when the children put their shoe in front of the fireplace and at the beginning of the 5th of December festivities. Most of the songs date from the 19th and early 20th century and, like the character of Zwarte Piet, some have been adapted to the changing times. Read more at DutchNews.nl

This article has been updated on December 7th, 2021.

Here is what I remember: I was almost five years old when I moved to the United States. That first Christmas, and many others after that, I had to sincerely explain to my classmates that EVERYONE knew that Saint Nick didn’t have little short helpers, he had tall Piets helping him. Of course he did not bring gifts in a sleigh, he brought them from Spain on a boat every year and everyone knew that you left your shoes out for him on the 5th of December. My little heart was full of joy at the season because it had always been a family time with my Oma and all the cousins, aunts and uncles but this year we would be celebrating in a new place without my Nederlandse family. Yet my mom made it special for us. Shoes out with treats for Sinterklaas. We got little trinkets and of course a chocolate letter (from the Dutch Store in Artesia!). My warm memories of our first few Christmases here in the US will always be among my best even if I did ultimately get used to Santa and his magical reindeer.

Tonight is Sinterklaas eve in the Netherlands, an evening that brings back happy memories of the childhood years spent in Holland. This was the evening when I put out my shoes near the hearth with great anticipation. We would pull a name from the pile of slips on the table and then write a poem to the person whose names we picked. I’d fill my shoes with goodies for Sinterklaas and a carrot for his horse with the hopes that Sinterklaas, (who moved from house to house on the rooftops riding his beautiful white horse) would leave a gift for me. The next morning, I’d find a game, a book, and a big thick letter “P” made of chocolate! Unlike in the U.S., my childhood Christmases were not about gifts. The fun, anticipation and gift giving was on St. Nicholas Day, December 6th.

Simple by today’s standards but nonetheless exciting and memorable

Growing up in the Netherlands, I celebrated Sinterklaas like any Dutch kid. Leading up to the big ‘Sinterklaasavond’ on December 5th, I watched TV to follow the adventures of Sinterklaas and Piet. On certain days I was allowed to put my shoe with a carrot and bowl of water for the horse near the fireplace. I could hardly sleep in anticipation of what I would get. So, sometimes I’d sneak out to the living room in the middle of the night to check for a gift. After immigrating to the US, I played the role of hoofd Piet (right hand of Sinterklaas) for 5 years and entertained students of the Dutch School in LA. We arrived by boat in San Pedro (holy Piet!). Little children (from 5-10 years old) would be on the dock, waving their little flags and sing Sinterklaas songs, welcoming Sinterklaas. It was heart-warming to see the kids’ faces while I handed out pepernoten. As adults we continue our ‘Sinterklaasfeest’ tradition with my Dutch ex-pat friends. We turned it into a white elephant game and exchange gifts and poems. We talk Dutch and bring Dutch Sinterklaas delicacies.  Dank u Sinterklaasje!

We would love to hear your stories about Sinterklaas. Please, share your memories. Do you still celebrate it today and if so how?