Candidates compete for the Dutch-Indonesian Cooking Award in the Netherlands. 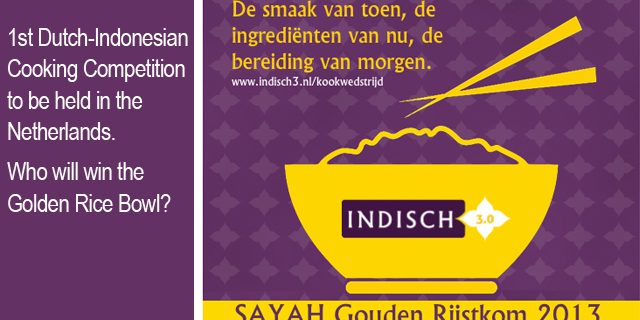 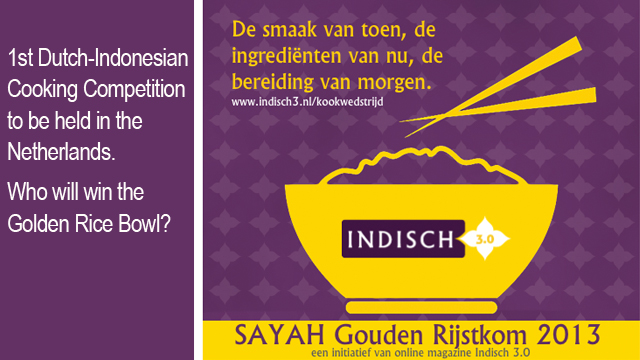 Dutch-Indonesian cooking is very much alive and ready for the 21st century. For the first time a Dutch-Indonesian cooking competition will be held in the Netherlands. This event is initiated and organized by the online magazine Indisch 3.0.  I have the honor to be part of the jury together with two distinguished Chefs; Pascal Jalhay and Lonny Gerungan.  Below an excerpt of what is published on the website of Indisch3.nl.

Dutch-Indonesian cooking in the 21st century: The taste of the past, the ingredients of the present and the preparation of tomorrow.

The cooking competition submissions closed on October 21st and a maximum of 10 nominees will prepare their dishes and present it to the jury in Amsterdam on November 4th.  The winner will be awarded the Sayah Golden Rice Bowl 2013.

Pascal Jalhay and Lonny Gerungan said it in the Dutch newspaper NRC, Jeff Keasberry said it in his blog and the famous food critic Johannes van Dam said it at Indomania, “Dutch-Indonesian cuisine is due for renewal. If the kitchen wants to continue to evolve,  new dishes are needed. To boost the development of new Dutch-Indonesian dishes, the online magazine Indisch 3.0 is organizing the ‘Dutch-Indonesian cooking competition 3.0”. 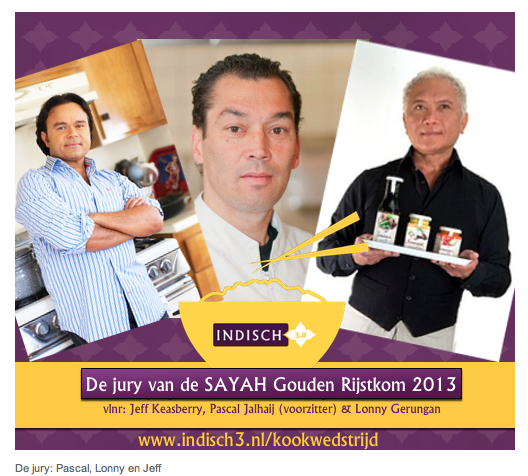 Food as the heart of the Dutch-Indonesian culture.

Made in Holland, acknowledged in Indonesia?

With these new dishes the jury expects to show that we are ready for the 21st century, and maybe more importantly, to strike a bridge with Indonesia. “Made in Holland, acknowledged in Indonesia,” is the thought behind it. Dutch-Indonesian food can be used to reinforce the relationship between the two countries. The organization is working on offering the winning dish during a prominent, future-oriented event in Indonesia.

The candidates are ready.

Eight candidates have been nominated and are invited for the cook-off to be held in Amsterdam on November 4th.

This competition is an initiative of the online magazine Indisch 3.0 and is partly made possible by Hanos, the Embassy of Indonesia, Restaurant Blauw, Keizer Culinair and Sayah.

For more on the Cooking Competition in Dutch click here.