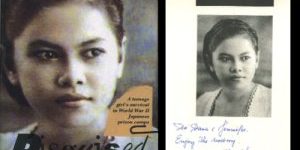 In 2004 my quest for English language literature about the Dutch East Indies came to a screeching halt when I discovered this wonderful book.

Rita’s small town of Djambi 120 miles north of Palembang on the east coast of Sumatra was invaded by the Japanese army.  As the war broke out in the Dutch East Indies in 1942, survival instincts kicked in on all levels.  For fear of her being abducted to become a “comfort woman” to Japanese soldiers the parish priest, Father Koevoets, and her parents collaborated on a scheme to turn Rita into “Rick”.

Over three years during the war Rita’s identity was that of a boy.  She became a clerk for the POW camp typing in the office and upon mastering the Japanese language became a personal interpreter for a Japanese commander.  During this entire time  she maintained her ruse as she witnessed things no 12-yr-old girl should see.  Her composure and ruse saved her life.

The book picked up another publisher in 2007 and went on to sell worldwide.  It was translated into Bahasa Indonesian under the title Sang penyamar and remained on the Best Seller List in Indonesia.  It went as far as Lithuania, India, Singapore, Australia and beyond.

Editor’s Note:  Rita is now working on the sequel of her book at the age of 80.  She lives a quiet life with her husband Dan of 57 years on the east coast of the United States.