Beyond the Pale – Over de grens 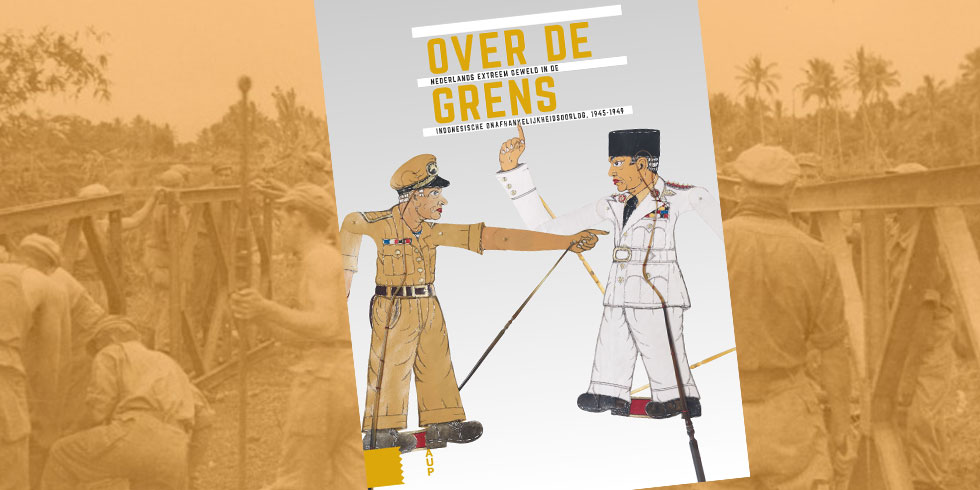 An Editorial on the Introduction to Over de grens

Director Emeritus for The Indo Project and

I apologize to you, dear reader.

I was going to read the recently published decolonization research anthology Over de grens: Nederlands extreme geweld in de Indonesische onafhankelijkheidsoorlog, 1945-1949, but the introduction to this multi-volume research project has already raised so many questions that I will devote this editorial to just the introduction, and my reservations about that introduction.

As such, this editorial will focus on sources/inclusiveness, bias, timing and intent.

In the wake of the publication of the research, which triggered the usual mudslinging on social media between the different interest groups and victims of this turbulent period, a certain fragile defensiveness of the historians themselves became palpable as well. Some of this defensiveness was manifested in the repeated use of the word “meerstemmigheid” (polyphony), i.e. the historians’ argument that this research is what it is because of the many voices and sources that informed the writing.

But has this really been the case?

The introduction discusses the intent of meerstemmigheid but also acknowledges its failure to do so: while the intent was to include more Indonesian researchers, this inclusion didn’t align with the narrow focus of the research, which was the “Dutch share in the war.” Let me quote the Dutch here with the English translation in parenthesis: Aangaande de samenstelling van het team is opgemerkt dat het aandeel van de Indonesische onderzoekers relatief klein was. Dat is niet onjuist, maar evenmin onlogisch gelet op het feit dat het programma vooral vragen stelt over het Nederlandse aandeel in de oorlog (With regard to the composition of the team it has been noted dat the contribution of the Indonesian researchers was relatively small. That is not incorrect, but not illogical considering the fact that the program ask questions in particular about the Dutch share in the war).

Aside from the double negations (niet onjuist; evenmin onlogisch), which seems to reveal some squirming about the very lack of meerstemmigheid, the admission that the research focus was solely based on the Dutch actions in the war is odd but significant. Why focus on one party exclusively when a war is typically fought between two parties?

Moreover, this rather troublesome statement can also be read as colonial mansplaining and arrogance: were the Indonesians not knowledgeable/informed enough about the Dutch violence to ask questions about it, research it and write about it? Does this mean that only Dutch historians can write about their own history even though they may have played a devious and dubious part in that same history? Moreover, would this also exclude American, British and Australian scholars who have all written, and sometimes have written more objectively and compellingly about this history than the Dutch themselves?

This historical possessiveness is nothing new (See Joost Coté’s 2009 article “Strangers in the house: Dutch historiography and anglophone trespassers”).

However, what IS new is that this guarding of the colonial closet by Dutch historians is now being presented as meerstemmigheid. For historians who emphasize the importance of transparency in their introduction, this seems misleading at best.

Another passage in the introduction underscores that “meerstemmigheid” could in fact not be achieved because the Indonesians made certain archives inaccessible. Because of this, this research is based mostly on Dutch archives. I quote: In de aanloop naar dit onderzoek […] maakten Indonesische diplomaten zowel de Nederlandse overheid als de instituten duidelijk ernstige reserves te koesteren met het oog op en een mogelijke belasting van de bilaterale relaties. Hoe dit ook zij, door deze beperkingen en de andere prioriteiten van onze Indonesische collega’s hebben wij het onderzoek niet uitgevoerd zoals voorzien. (In preparation for this research […] Indonesian diplomats made clear to both the Dutch government and the [research] institutes to have some reservations considering the potential burden [this might have on] on bilateral relations. Irregardless, due to these limitations and the other priorities of our Indonesian colleagues we did not execute the research as imagined.”)

We did not execute the research as imagined… in other words, while “meerstemmigheid” was on the agenda, due to the lack of Indonesian historians and sources, this research is anything but “meerstemmig”. That the use of meerstemmigheid was then used in press conferences and interviews to counter the alleged and potential bias of the research is both disingenuous and troublesome. Plus, it triggers further suspicions about actual bias.

As readers we also would like to know why the Indonesians had reservations. Was it really their concern for bilateral relations or is there more here that meets the eye? What are the Indonesians hiding? Were they afraid that there are things in those archives that may not be particularly flattering to the Indonesians either, like the human rights abuses and killings of Dutch civilians during the Bersiap?

It may seem petty to turn this into a battle of the use of words but to the historians who wrote the introduction to this multivolume research project, words are carefully chosen and explained. That said, when there seems to be a need for more transparency and the explanation of words, one hides behind vagueness and platitudes (like what were the other “limitations and priorities of our Indonesian colleagues”?) when more transparency is called for.

Interestingly, after the publication of the research project, the lead historian Frank van Free didn’t seem to care about words anymore, and who knows, incensed by the public outcry, then said in a radio interview of February 20th, 2022, that they really should have used the word “war crimes” to describe the events in the independence war. So why not use that word in the research publication from the start? In a press conference, Van Free also mentioned that the publication would not lead to lawsuits against certain individuals who may have engaged in war crimes.

Aside from the fact that a historian cannot determine and therefore should not proclaim whether there be any lawsuits, one should ask why there shouldn’t be lawsuits and/or why there shouldn’t be a thorough investigation of those soldiers who did commit war crimes. Because now, every veteran who served there gets labeled as a potential war criminal, even though the Swiss researcher Rémy Limpach (whose De brandende kampongs van General Spoor (2016) was one of the reasons for the Dutch Cabinet to order this follow-up research) has stated that the majority of veterans in the Dutch East Indies didn’t commit any war crimes. If you want to be nuanced, as surely the historians of this project intended to be, that kind of nuance is essential because our cancel culture makes it far too easy to stigmatize and cancel an entire group over the actions of some really bad apples.

Speaking of nuance, as well as the proper use of words— why call this research a “report” when it comes in the guise of an anthology of articles that looks more like a bunch of conference papers? This is not a report or an investigation, but an academic exercise, which, on initial review, has findings and observations that have been, for the most part, in the public domain already. Due to some of the regurgitation of things that are well known, the historical merit of this project gets automatically downgraded while the political motive seems to become more apparent. This brings me to the following question.

Why now? some of the critics have asked, when most of this is not necessarily secret or new? In light of timing, motive and government contamination, why did PM Marc Rutte call a press conference so quickly to apologize to the Indonesians, when the Indo and Indies community are still waiting for an apology and backpay during that same period in history? At the time of the press conference, Rutte couldn’t have read the entire report, so he might have been advised by the historians of the report: was he? And if so, how do those optics contribute to the independence and objectivity of the report and its historians?

While I do think an apology is necessary and long overdue, why not apologize to ALL victims of that war? Rutte did make a half-hearted attempt to mention the veterans and the Indo and Indies community but the focus was clearly on the Indonesians, and by singling them out the way he did, he set them up against the Indo and Indies community as well as the veterans, and this sliced open old colonial pains of the conflict, its context and its aftermath.

In addition, if the apology is so heartfelt and true, why articulate it in Dutch, a language the majority of Indonesians no longer speaks, let alone understands? If you want to do something this momentous and international, why not address the Indonesians in English, and travel to Jakarta to do it? Go big, Mr. Rutte, or go home.

At the same time, it does make one wonder what this apology really means. Is it just an empty gesture to improve bilateral relations? Or will there be a concrete and consequential follow up for the Indonesians?

In the background, the Ukrainian invasion took a hold of our news cycle, which was an excellent opportunity for Indonesia to scale up its continued genocide against the people of Papua. After all, the world (and the Netherlands) has looked away from their suffering for a long time. Indonesia wants the gold mines, and gas and oil, and well, maybe Rutte cares about that too now that the Netherlands may be in a bind for gas and oil due to the invasion of Ukraine? So was Rutte’s sudden out-of-the blue apology a coincidence, or was it planned and politically motivated? You tell me.

Needless to say, that the Dutch government has been dragging its feet on any apologies or backpay to anyone certainly has another motive. If you wait long enough, everyone involved is dead, statutes of limitations kick in, and all that remains is a rewriting of history in which anything and anyone that/who represented the colonial class is canceled and made into a war criminal.

War crimes, no doubt. The wrong war? For sure. Is colonialism evil and exploitative? Oh yes. Apologies? Long overdue. The building of a Bersiap monument in The Hague? No can do. Besides, what was the Bersiap? And isn’t it a racist word? Now that’s where we are in the postcolonial discussion in the Netherlands. We need a coming clean for ALL parties involved. Otherwise, the wounds will never close.

The introduction to this important publication seems to point to the fact that Dutch historians have been selective with the facts. This kind of bungling in telling the colonial story makes it all the more necessary that a truly “meerstemmige” and independent council and truth commission of international researchers and scholars should be assembled to get to the bottom of the entire colonial story, from the very beginning of this long history when Coen set foot on the Banda Islands and started massacring its inhabitants.

That the Dutch government doesn’t want to go there is more than obvious. A country that has reneged on its backpay like no other Allied country during WWII will certainly be disinclined to pay something bigger, like reparations. This, I think, is maybe the main reason why the Dutch Cabinet asked for and handled this research the way it did: it had the semblance of propriety, and was followed by a shallow apology, but it was all kept in house… for the world not to notice?

We at The Indo Project noticed, however, and we will continue to notice and call it out, until justice is done for all.