As told by Carol Norwood of Pennsylvania, USA

The photo from the home page slideshow is of Carol Norwood’s mother named Cita at the age of 2 in January of 1930.  They were walking with their baboe (nanny) with mother and baby. 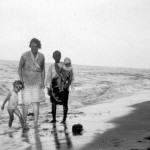 Carol’s German grandfather worked for a Dutch company by the name of  Senembah and from 1927 until 1940 he worked as manager on a tobacco plantation on the island of Sumatra.  While there he and is wife Agnes had two daughters.

Her grandfather had interned in Holland for Theodor Oudemanns who worked in the agricultural field.  It is speculated that he got the job in the Dutch East Indies through this internship.  The plantation was near the capital city of Medan.

The second photo is of a Chinese wedding sent to Carol’s grandfather by a colleague friend of his by the name of  Ihr E. Graff. On the back of the photo he writes that the bridegroom was an acquaintance of his.  He writes that since he has been out of the hospital he’s had to work a lot because of the backlog during his absence.  The handwriting was in German and written in the old-fashioned manner of its time.   We were kindly assisted by a friend in Germany in the translation of not only the language but the style of  grammar used in this era. 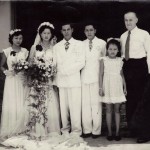 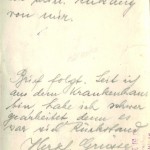