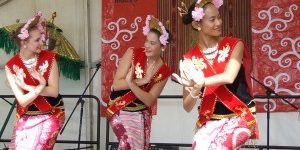 Kathryn Pentecost is currently a PhD student in the School of Communications, International Studies and Languages at the University of South Australia, Magill Campus. This is her first contribution as a guest author for our web site blog. 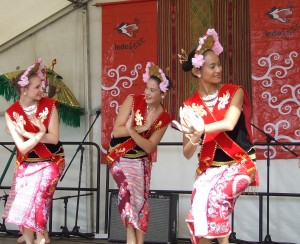 For the last three years, Rymill Park in Adelaide, South Australia has been the venue for Indofest -Adelaide’s Festival of Indonesian Arts and Culture. Increasingly popular, tens of thousands of Indonesians, Indo-Australians and other South Australians have gathered in the heart of Adelaide’s festival district to participate in a day of family fun with music, art, cultural workshops and great food. There was also an Indonesian film festival held at another venue as part of Indofest.

Music and dance from performers such as Saratuspersen band, Dodi Darmadi (Sundanese musician), Indo dancer – Alfira O’Sullivan, Rindang  (Achenese performers), Club A Go Go (Adelaide based performers of East Indonesian music), Gamelan Sekar Laras (Javanese orchestra), Pak Gede Ika Riyadi (and his fellow dancers) and Amrih Widodo (teacher of a workshop on Javanese dance) made the festival both culturally exciting and very entertaining. In addition to performances on the main stage, art, dance and mask-making workshops brought knowledge of some traditional skills to the general public of Adelaide.

Notable this year, were the number of local and overseas dignitaries who attended to give the festival their blessing, including Adelaide’s Premier The Honorary Mike Rann, Lord Mayor Michael Harbison, the new State Labor Minister for Multicultural Affairs Grace Portolesi, Liberal State opposition leader Isobel Redmond, representatives of the Australian Indonesian Society (festival organisers) and the Honorary Consul of Indonesia (for South Australia). One could not help feeling that all sides of politics were keen to be seen as supporters of a multicultural Australia. 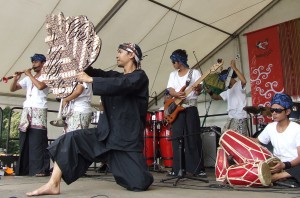 The growing popularity and success of Indofest is another first for South Australia in terms of cultural engagement with our neighbours in the Asia-Pacific region and adds to South Australia’s reputation as ‘The Festival State’. In a city that is home to the Oz-Asia Festival, (at the Adelaide Festival Centre), Indofest makes a further contribution to raising the profile of cross-cultural events and it is the only one of its kind (as far as this writer is aware) in the whole of Australia.

In 2009, I documented the festival in still photographs. In 2010, I filmed much of the entertainment and the speeches on DVD and some of this footage will soon be available to view on the official website – come time to advertise Indofest 2011. Hopefully, for now, readers of this blog will enjoy the still photographs of Indofest 2009.