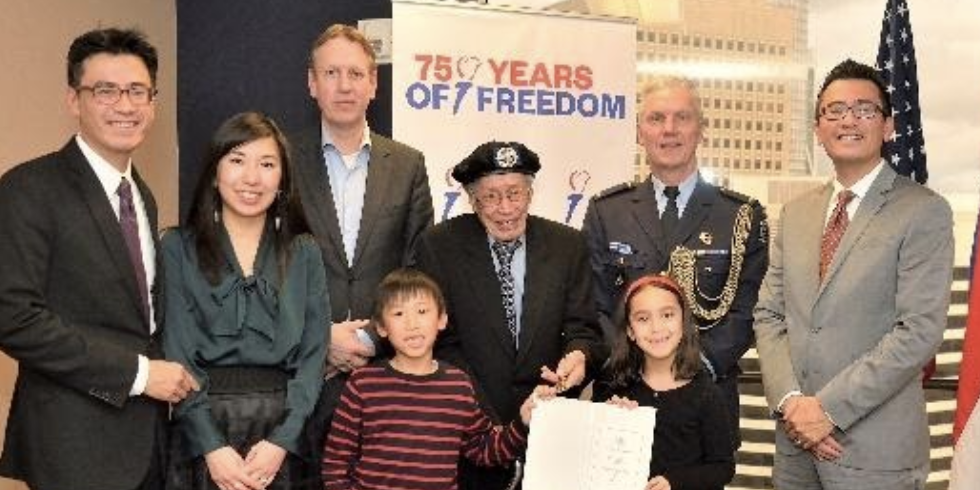 On January 13th, 2020, Antonie Heystek (sergeant in the Dutch East Indies Colonial Army and member of the militia in Eastern Java during WWII), received a posthumous Mobilization War Cross from Consul General Gerbert Kunst at the Dutch Consulate in San Francisco. The War Cross was received by his nephew, René Heystek, in a small but intimate ceremony, organized by Lamar Heystek and the Consulate.

Since Antonie Heystek fell victim to the same Japanese conspiracy and false accusations by the Japanese Kempetai as my great-uncle Ferdinand (Peddy) Francken, a story which can be found in my book Silenced Voices (Ohio University Press, 2008), the Heystek family asked me to provide some context with regard to Heystek’s tragic execution in 1943. Below is the speech I gave. – Inez Hollander

In our day and age, the word “terrorist” and “spy” have heavy connotations, but the victims of the so-called “Militia Affair” (with, among them, Antonie Heystek and my great-uncle Peddy Francken) were characterized as such by the Japanese Imperial Army during the Second World War in the Dutch East Indies.

In reality, these men were resistance fighters and it is distressing that it has taken this long before Dutch resistance fighters in the Dutch East Indies have been acknowledged and honored by the mother country for whom they fought, suffered and gave their lives. However, for the Indo-Dutch community, these men have never been forgotten. They are the heroes and scar tissue of our family past and shared heritage.

But what was the “Militia Affair” (Landwachtzaak) and who were the victims?

Before and during the Japanese invasion, it became clear that Eastern Java was a vulnerable spot defensively. Because of this, a number of planters gathered to discuss how they could prepare and defend themselves against the Japanese. This amounted mostly to the gathering of weapons and the offering of shelter for soldiers. They formed a militia but to typify them as a well-organized and strong militia may well be an exaggeration.

When the invasion became an irreversible fact in 1942, the Japanese focused on Eastern Java as well, as they suspected it to be the location where the Allies might land. As a result, the militia officers in the area were instantly a suspect group, and even more so when, on a plantation, several weapons were found, together with large amounts of cash.

This resulted in the arrest of a group of men who were interrogated and tortured by the infamous officers of the Japanese Kempetai.

After two planters with the last names Man and Mulder were beaten to death during interrogations in the tobacco barn of the Birnie family, fellow prisoner Dr. Nijk advised the others to make up a story and sign it, in order to avoid the fate of Man and Mulder.

However, the Japanese immediately seized on this as a confession of guilt and the next day, in the city of Jember, the death sentence of the men was announced. Vicar and fellow prisoner, Siebold van der Linde, saw the trucks with the condemned men drive by. I quote from a passage which comes from the Secret Dossiers of the Dutch Foreign Affairs’ Archives in The Hague:

“On two trucks I saw planters and, on a third, a number of Ambonese men. The planters were bare chested. Whether they were chained together, I could not tell. That same day, I did hear, however, that they had been driven onto the trucks with people kicking and beating them. Only later […] did I find out from the Ambonese that they had been sentenced to death by a military tribunal, after which they were decapitated. They warned me not to confess as I might risk being decapitated as well. […] Later I heard from an Ambonese who had been there, that all of them had been decapitated in the Mumbul Forest, 30 kilometers south of Jember. I also heard […] that he, with a couple of Ambonese and some native inmates, had had to dig a mass grave and that they had to put the corpses in there and cover the grave. In the end, they were expressly told that they could never tell anyone about this.”

The stubborn “Indies silence”, which has manifested itself in the wake of the Japanese occupation, the internment and the Bersiap, was also the cause in my family for the complete ignorance and silence surrounding the suffering and death of my great-uncle. His and Antonie’s suffering were quickly pushed under the rug, and especially in the Netherlands, where the Nazi occupation had left its own traumatic sorrows and stories.

Nonetheless, it is nothing short of miraculous that, a few years ago, I came in contact with the Heystek family when I was working for Dutch Studies at UC Berkeley. Personally, we were far removed from the Netherlands, living our lives in California, but at the same time, and without knowing that at first, our families had been intimately connected, since about three quarters of a century ago, Anton and Peddy had been fellow victims of the same false accusations and the terror of the Japanese regime.

The significance of this honor for Antonie Heystek today is not only a balm on the wounds of the Heystek family, but it is also a new opportunity to open the discussion (again) about the war and decolonization of the Dutch East Indies. In the Netherlands, that conversation hasn’t quite come to a close yet and this is tangible in the so-called and on-going “Indische kwestie”, as well as the realization that the Indo-Dutch community still feels ignored and invisible compared to their fellow Dutchmen when it comes to matters of war and peace.

Since the world community has shown signs of an appetite for war again, it is vital that we give the story of Anton and Peddy a place in our history, to serve as a lesson and warning for the generations who haven’t been through war. Freedom, democracy, can never be taken for granted, but sadly, we only realize that when freedom and democracy are taken away from us.

I conclude with the beautiful words by the Dutch poet Leo Vroman:

hoe de oorlog is verdwenen/About how the war has disappeared

alle malen zal ik wenen./And every time, I shall weep.