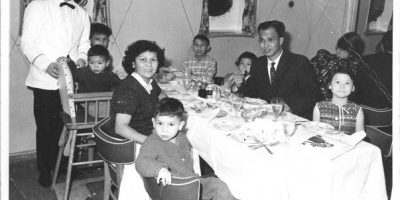 By Ray and Ludy van Broekhuizen

The van Broekhuizen family arrived in the cold “kikkerland”, the Netherlands, in November 1957 from warm and tropical Jakarta, Indonesia. At that time, the family consisted of dad, Charles Louis van Broekhuizen, mom, Nancy Cornelia Tency (van Slooten) and five children (Roy, Ray, Ruby, Rose, and Rene). They left Indonesia hastily because of the growing unrest and turbulent post colonial time in the still newly independent country. They left with only the clothes on their back and a couple of suitcases fearing for their lives. They arrived in the “fatherland” and ended up in a small village in the province of Overijssel but only stayed for a brief 4 years. Trying to acclimate to the cold climate (and some would say, the cold Dutch people and culture) was something that Dad just could not bear. So the family made plans to immigrate to America.

The van Broekhuizen family arrived in New York City on the Holland America Line ship, the Maasdam, in November of 1961 along with another family (Gaby and Zus Ladage with their son Frans) who unbeknownst to either would become life-long friends. The families then took a train across country from New York to Portland, Oregon. Dad only spoke a little English and Mom was tending to the children who at that point numbered six (Ludy, the youngest boy,  was born in Holland, had his second birthday on the ship).

Through the Pastor-Walter Act, we were sponsored by the Oregon City First Methodist Church. The church prepared for our arrival and paid the 1st month rent on what to us was a huge house compared to the small flat we occupied in Goor, Holland.  Since we arrived just before Christmas, the church brought us Christmas gifts (toys) and we were all so amazed and excited! The church even found Dad a job at the Ice & Cold Storage company in Milwaukie where frozen foods were kept until transported to grocery stores in the Portland area. Dad had a big heart and was always looking to help someone—sometimes to the dismay of Mom who was always taking care of us. Dad would often bring home damaged goods (packaged frozen vegetables and meats) and shared these with other Indo families all of whom were in a similar financial position struggling to get by. Mom cooked, cleaned, and took care of us kids (that by this time now numbered eight–Lorette and Michelle were born in the US) in a remarkable way that to today’s generation would seem impossible to do successfully. Every weekend we would “kumpul” with other Indo families (van Waardenburg, van Bronckhorst, Zeewald, Idzardi, Ladage, Bouwens, Rhemrev, de Water, Baden, Verdonk, Ramaker van Praag, Bergman,  Tjaden,  Monsauret, and many more) most of whom also had 6-8 children. And of course there was always Indo food. It seems like Mom was constantly in the kitchen and we kids went to school smelling like fried lumpia! There were so many joyful times for us growing up in spite of the lack of funds. We went camping and also took road trips to California and even got to go to Disneyland- often we would connect with Indo families along the way and stay with them to save money. The spirit of Indo hospitality was still very alive. Later in life, Mom confessed that she couldn’t stand camping since she, of course, was responsible for cooking for ten on a Coleman stove—she and the gray enamel rice steamer were always at work.

Unfortunately, Dad struggled with layoffs and English and though he tried his best, could never seem to adjust to life in America. For him, leaving Indonesia was the end of his happy life. The life he left behind was ever present in his psyche. At some point along the way, Dad decided he would try to start doing “business” in Indonesia. Nothing ever really worked out, and he finally left America for good in February 1977 leaving Mom and us behind and only looking back infrequently. This left Mom to start taking care of the business of making a living and watching over the family—most of the kids were already grown up, but the youngest was only ten years old. All of a sudden, the quiet behind the scenes woman took charge and started taking classes at community college, worked odd jobs here and there and basically did anything necessary to support all of us if not financially, definitely emotionally and spiritually. Mom has always been the true rock in our family. Throughout our lives she has blessed us with her wisdom, insights, and oftentimes surprisingly modern ways of “figuring things out”. Mom has lived through war, hard times, and the deaths of two daughters to cancer Ruby  and Rose. Her unwavering faith in God has helped her through all of these difficulties.  She has completely redefined herself as an independent woman who knows how to accomplish whatever she needs to do. At 87, Mom still loves going shopping, tending to her African Violets and other plants, cooking lunch for her friends, and talking with them on the phone. She is always trying to give us money even though none of us need it. 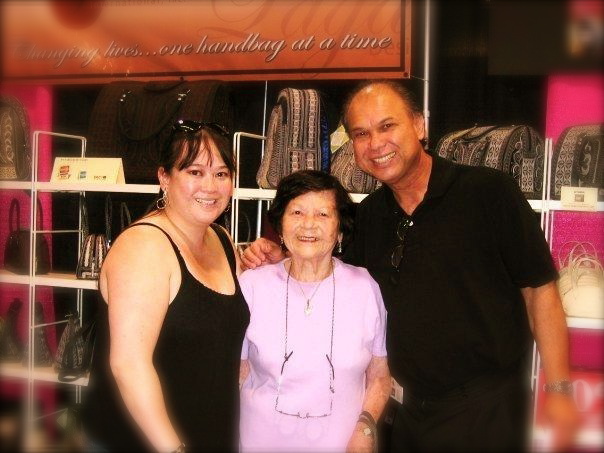 Through all the ups and downs, as first generation immigrants, we were raised with a great set of old world values, manners, and respect for others and a true sense of heritage and community. Our parents raised all of us with the expectation that we get along, help each other, and stick together—and it worked out just as they had planned. Their sacrifice was our gain. Their suffering paved the way for our bright futures. Thanks to all the Indo parents who were willing to give up so much for the sake of their children. What an awesome legacy to leave behind.