A Brief History of the Dutch East Indies Part 2: Before the VOC. 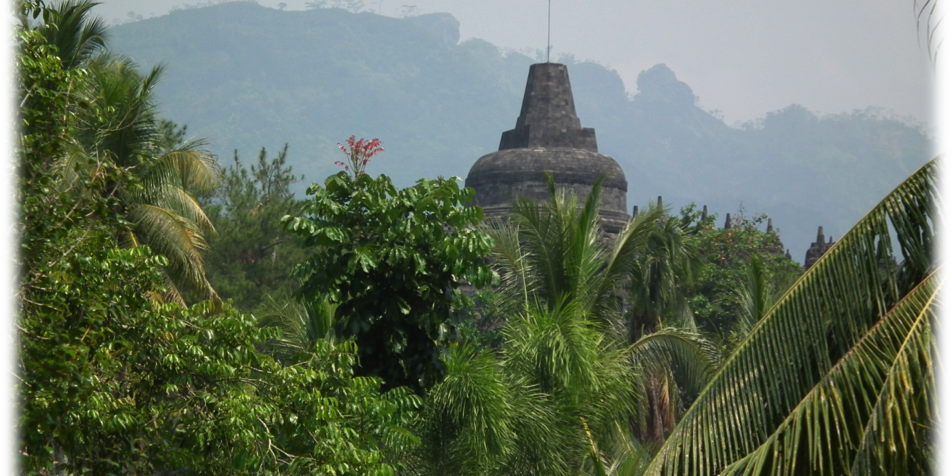 Indonesia is known as the world’s most populace Muslim nation and its cultural history is richly diverse. Throughout their history, Indonesians have been influenced by a diversity of religious and cultural influences, (though some commentators today fear that the country is becoming a less tolerant place) (Vltchek, 2012). Looking back into Indonesia’s history before the VOC, we see the multi-layered religious and cultural life of the archipelago which the Dutch (and other Europeans) encountered in the seventeenth century – whose remnant buildings and artefacts are the focus of much ‘tempo doeloe’ (nostalgia) tourism today. Indeed, some cultural commentators make the point that more attention needs to be paid to the ‘Indonesian body beneath the clothes we call the Netherlands Indies, [because] this body has its own history, autonomous in a fundamental sense…’ (Smail cited in McKay, 1976: 117). This is a history which has been influenced by Hindu-Buddhist traditions and the growing power of Islam. 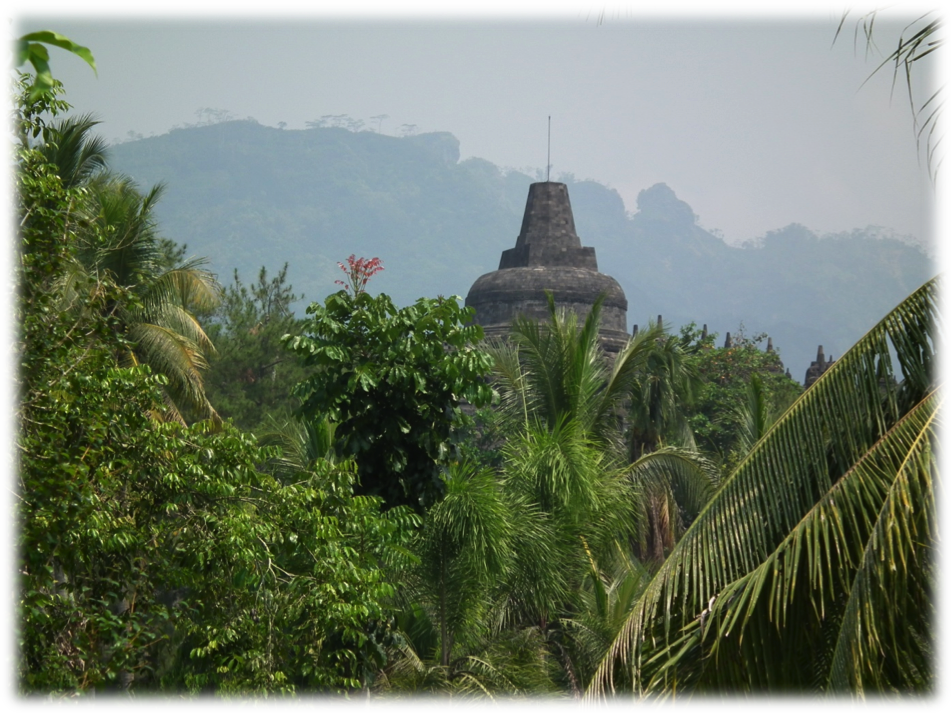 Written history in the archipelago begins with Hinduism in the 8th century CE (Dalton, 1991: 86), though it is thought that Hinduism dates back to the 2nd century CE in pre-colonial Indonesia (Buddhist Studies, 2013). For over 750 years (till the fifteenth century), temples (candi) were built in Central and East Java – the most significant being the Prambanan complex (near Yogyakarta), consisting of 240 Hindu temples (UNESCO, 2013). In the 7th to 14th centuries, Buddhism flourished (Buddhist Studies, 2013) and Borobudur is its enduring monument, representing three views of the universe: Kamadhatu (the world of desire), Rupadhatu (the world of forms) and Arupadhatu (the world of formlessness) (Pentecost, 2013: 288).

Before the Dutch established a fort in Batavia (Jakarta), Java was ruled by dynastic families, with Majapahit being the dominant state in the period c. 1300 – 1500 CE (Ricklefs, 1988: 14). The Hindu-Buddhist Majapahit was both a land-based and trading empire (Ricklefs, 1988: 17). At its peak, during the reign of Hayam Wuruk (1350 – 1389) there were 12 provinces in Central and East Java ruled by the king’s relatives, including Mataram (Yogyakarta) (Wikipedia 2013). On the western tip of Java was the kingdom of Banten – a trade centre (with influence over the pepper-producing areas of southern Sumatra), which attracted both Asian and European merchants, including the Chinese, Portuguese, English and Danes (McKay, 1976: 114-5).

This archipelago of islands was not a unified country before colonial settlement. Overall, it was difficult to maintain control over several populated areas at once because of physical isolation and therefore, regional overlords had a great deal of autonomy (Ricklefs, 1988: 16).   The power of pre-colonial states was vested in military strength, the loyalty of lesser nobles to a particular ruler, a leader’s perceived connection with the supernatural, a network of spies and strategic marriages (Ricklefs, 1988: 16).

A series of regional cultural traditions tied to particular linguistic and ethnic groups had many shared features, though many differences (Ricklefs, 1988: 47). However, of what remains in terms of artefacts and documents, evidence from early cultural traditions is from the courts rather than from folklore (Ricklefs, 1988: 47). In the western archipelago, a classical Malay culture with strong Islamic influences (evidenced today in Aceh and on the Minangkabau people of Sumatra, the Bugis and the Makaserese), was dominant (Ricklefs, 1988: 47-49; 53). By contrast, Javanese classical literature evolved from Indianised traditions and the lesser use of Arabic script, and its contemporary influences can be noted today in Madurese and Sundanese cultures (Ricklefs, 1988: 47-49; 53).  In Bali, Indianised traditions remain in a society where Hinduism is a living religion. 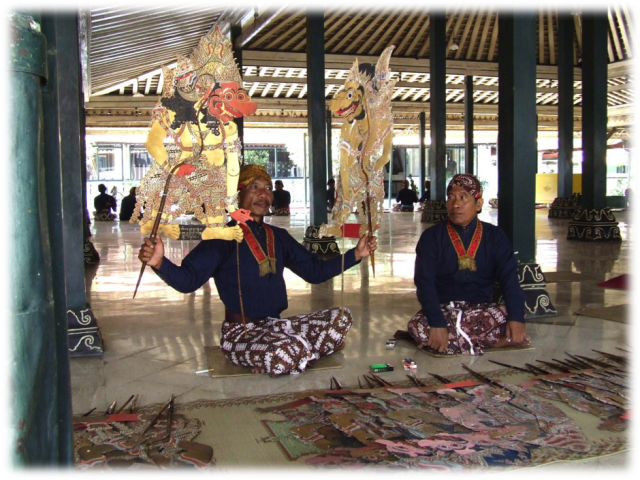 Wayang kulit at the Kraton, Yogyakarta (Collection: the author)

Wayang golek (round wooden puppets with moveable heads) and wayang kulit (flat puppets made of leather) – two different shadow-puppet forms – have been a major means of preserving Hindhu-Buddhist heritage in Indonesia (Ricklefs, 1988: 50). Stories of the wayang kulit are based on the Hindu epics such as Ramayana (an epic poem) and performed today for visitors to Indonesia (Ricklefs, 1988: 50). Ramayana is also performed as a live staged production. 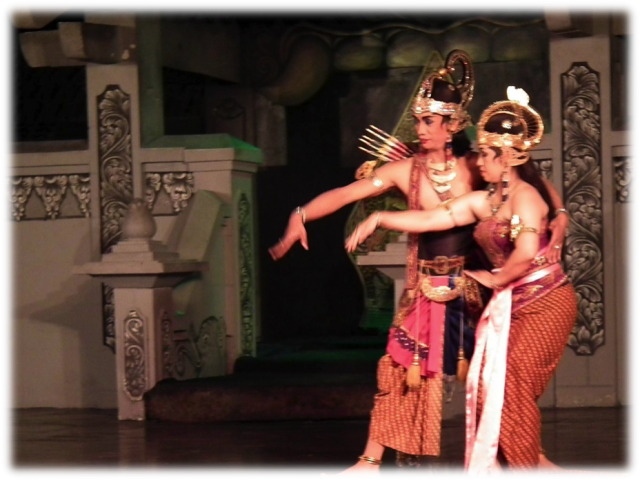 Indeed, the visual and performing arts have remained highly developed and popular throughout Indonesian history (Ricklefs, 1988: 53). Batik (dyed fabric), architecture and weapons, especially the ornate kris (dagger) (Ricklefs, 1988: 53) have retained some of their pre-colonial aesthetics and forms, though traditional wax-resist batik has often been subsumed to contemporary machine printing methods. Dance, which was performed in the courts of Indonesia (Ricklefs, 1988: 53) is now a ubiquitous tourist experience across the country. 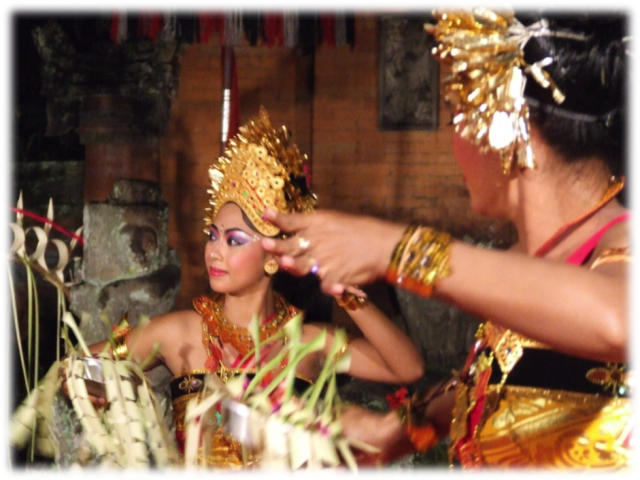 On the other hand, Islam has influenced the aesthetic of place, in the sense that Hindu-Buddhist architectural styles are now giving way to Arabic styles – particularly in the construction of contemporary mosques; also, even in Bali, Hindu-Buddhist temples sometimes sit in the shadow of tall minarets with big loudspeakers.

The spread of Islam in the Indonesian archipelago is evidenced in various inscriptions and travel journals, though no tangible thesis yet totally explains its adoption by Hindu-Buddhist/animist peoples. The earliest evidence of a Muslim dynasty is in Sumatra (Ricklefs, 1988: 3). Significant gravestones have also been discovered near the court of Majapahit in East Java (Ricklefs, 1988: 4). These may suggest that some members of the Javanese elite adopted Islam whilst Majapahit was at the height of its power though it is difficult to say with any certainty exactly how Islam was adopted and disseminated (Ricklefs, 1988: 4). It seems Islam also spread to the spice islands of the far eastern archipelago – areas important in international trade (Ricklefs, 1988: 8).

Local legends tell of the coming of Islam and have several common features: foreign origins and trade connections, a top-down process of conversion from elites to commoners and the role played by esoteric learning and the supernatural (Ricklefs, 1988: 8). The origin of certain branches of Islam has been attributed to places such as Gujerat in northern India, Arabia, Egypt Persia and other places, and it seems that there was no single source of influence (Ricklefs, 1988: 11). Though the Sufi influence is often claimed to be significant, very little documentary evidence exists to support this, whilst the influence of a mystical tradition is, however, clear in written Javanese texts (Ricklefs, 1988: 12). One major question that remains is: ‘Why was Islam adopted by a significant number of Indonesians in the 13th, 14th and 15th centuries?’ (Ricklefs, 1988: 11). 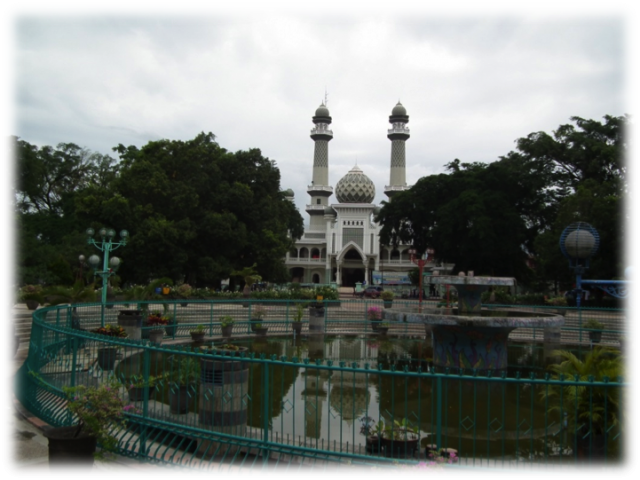 Certainly, international trade has been largely attributed as a source of early and continuing contact with Islam. Muslim sailors allegedly came to ‘the spice islands’, for instance, in search of nutmeg, cloves and galangal (Wikipedia, 2013). Legend has it that wali sanga (nine holy saints) spread Islam throughout Java (Wikipedia, 2013).

In Java, whilst Islam had a limited impact on Javanese philosophy, it did change certain social customs; for instance, people adopted circumcision and burial (as distinct from cremation) (Ricklefs, 1988: 13). In Bali, however, Hindu-Buddhist traditions have remained predominant (Ricklefs, 1988: 13) – despite Islamic influence in the southern and northern parts of the island.

Contemporary scholars claim that the Dutch misunderstood Islam (Hooker, 2003: 12). Firstly, the VOC had no interest in understanding the religion of the majority of people in the archipelago because of their primary focus on commerce; secondly, the Dutch government did attempt to study Islam but its aim was largely the maintenance of order in the colony, especially when resistance to colonialism came often under the banner of Islam (Hooker, 2003: 12). This will be discussed in a further chapter on the Islamic scholar and Dutch government advisor: Christiaan Snouck Hurgronje.