A Brief History of the Dutch East Indies – Part 1. 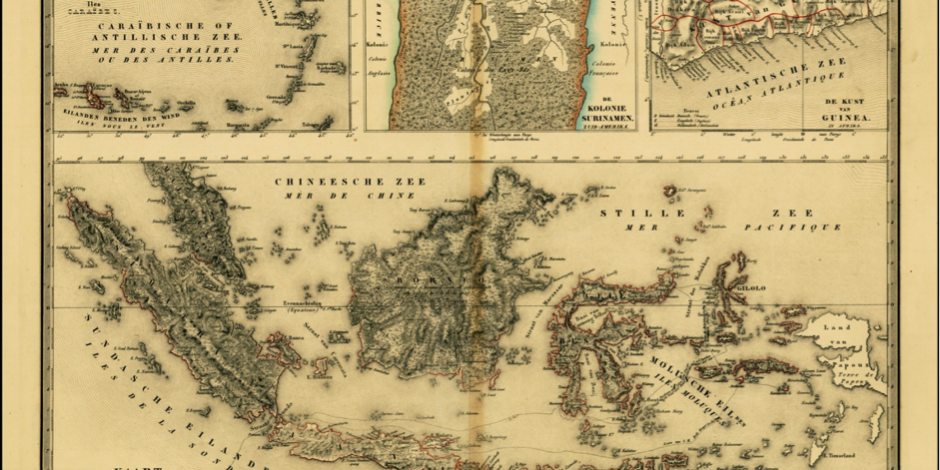 In this series of monthly essays, I hope to help the readers understand the great complexity that is the story of the Dutch East Indies, now Indonesia. I write as both an ‘insider’ (an Indo) and an ‘outsider’ (an Australian). Having just completed my PhD on my own family history in the Indies/Indonesia (c. 1807 – c. 1957), I have gained a degree of insight into the topic which I wish to share. In doing so, I hope that some of your own questions will, if not fully answered, at least be contextualised. This introduction demonstrates the scope of the series of essays and aims to give a brief overview of the history which starts in pre-colonial times and ends in the present day. 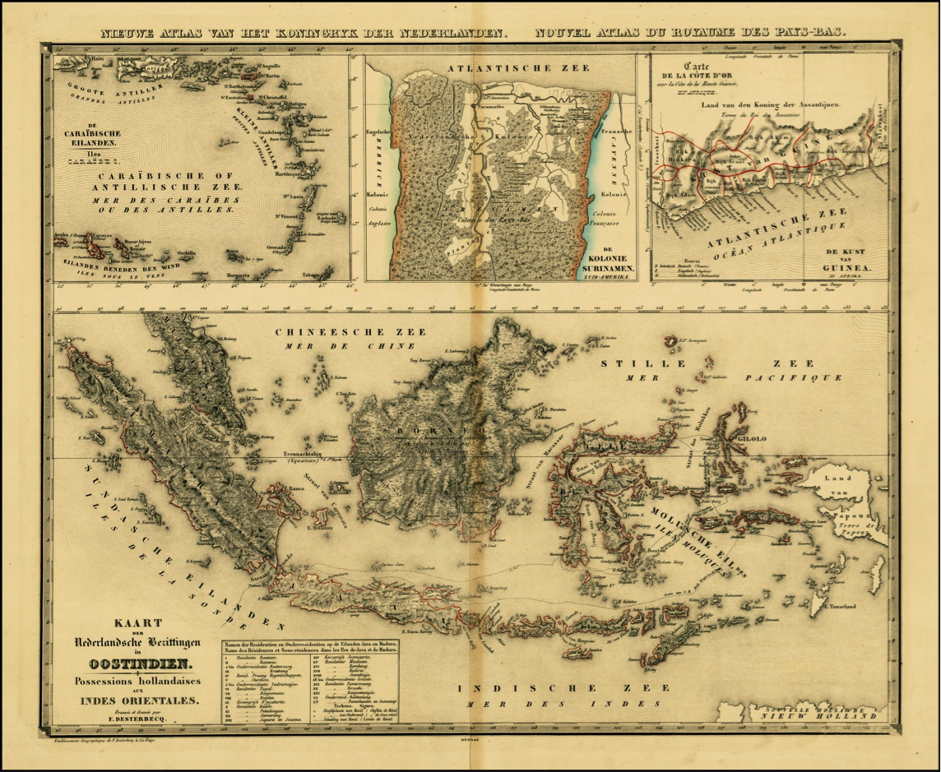 Figure 1: Map of the Dutch colonial possessions in 1840 – including Dutch East Indies, Curaçao and Dependencies, Suriname and Dutch Gold Coast

The Dutch East Indies (c. 1600 – 1942) was part of a vast Dutch trading empire (Nederlands-koloniale Rijk) which stretched across the world. In the 1400s- 1600s CE, the Spanish, (including Columbus), Portuguese, Arab, English and Dutch traders were all keen to exploit the natural resources of islands in the south-east Asian archipelago and the ‘New World’ of the Americas. Nutmeg and cloves, in particular, were highly sought after in Europe as medicines and food: thought to ward of the Plague and also regarded as extremely valuable in social and economic terms (Humble, 2012). Most of these spices – including cinnamon and mace – grew only on a handful of islands and had been traded for thousands of years. The race to discover ‘the spice islands’ was particularly competitive and began a process whereby Europeans exploited the peoples of the archipelago (we now call Indonesia), and their natural resources. These ‘spice islands’* were those of Melaku (Moluccas) and Banda in what is now far eastern Indonesia.

In the archipelago of  over 17,000 islands of which only about 900 were inhabited, there was never a unified ‘Indonesian’ culture but rather a series of regional cultural traditions belonging to specific linguistic and ethnic groups, including (but not exclusively) the Achenese, the Minangkabau and the Batak (Sumatra), the Sundanese and the Betawi (West Java), the Cirebonese (West and Central Java), the Javanese (Batavia, Central and East Java), the Makasarese and the Bugis (South Sulawesi and East Kalimantan), the Makassarese and Minahasan (Sulawesi), the Madurese (Madura), the Balinese (Bali),  the Ambonese (Ambon in Melaku/Moluccas) and the Bandanese (Banda Islands).

In 1602, the Dutch created the world’s first multinational trading empire called the Vereenigde Oost-Indische Compagnie (VOC) or Dutch East India Company (Woods, 2009: 25).  The Dutch wanted to gain supremacy in the Asian trading sphere – particularly over the British and the Portuguese. The VOC built ships in Amsterdam and these ‘East Indiamen’ sailed all year round leaving port laden with ‘textiles, wine, stone ballast, cannon, domestic goods… silver and gold coins’ for ‘trade with the principalities and kingdoms of East Asia’ (Woods, 2009: 24).

*The other ‘spice islands’ were Zanzibar Archipelago (East Africa) and Granada (Caribbean).

The VOC created forts and settlements in places as widely dispersed as Mocca (Arabian Peninsula), Surat (Gujarat), Colombo and Galle (Sri Lanka, formerly Ceylon), Calcutta (Bengal), Beijing, Macau and Canton (China), Deshima (Japan), Manilla (Philippines), Malacca (Singapore) and Suriname (then called ‘Dutch Guiana’ in northern South America) (Bosma and Raben, 2008: 2). In 1626, The Dutch had established a settlement in North America called New Netherland of which New Amsterdam (New York) was the capital. It was a base for the Dutch West India Company (established in 1621) which also had settlements in Curaçao (and other islands) in the Caribbean near the coast of Venezuela. (Today, the Dutch empire consists only of the Netherlands proper, and Aruba, Curaçao, Bonaire (special municipality) and Sint Maarten (Saint Martin) in the Caribbean.)

The Dutch also ventured south of the Indonesian archipelago and mapped New Holland – (most of) present day Australia. In 1650, mapmaker Jan Jansson produced a map titled Mar del Sur Hispanis Mare Pacificum (South Sea and Spanish South Pacific) (www.nla.gov.au/content/recent-aquistions-highlight-june-2013). Australia, however, turned out to be of no enduring interest to the Dutch who saw it as poor in natural resources.

Before the VOC came to the East Indies, kings and princes ruled the islands, which were already the focus of extensive trade in goods, services and people (slaves). In the period c.1300 – c.1500, Islam was making its presence felt on peoples who had previously held animist and Hindu-Buddhist spiritual beliefs. There is evidence that some members of the Javanese elite adopted Islam at a time when the Hindu-Buddhist state of Majapahit was in its heyday (Ricklefs, 1988: 4). Exactly, how and why Islam spread is still open to speculation. By the seventeenth century when the Dutch arrived, only two kingdoms survived: Bantem (West Java) and Mataram (around present-day Yogyakarta) (Ricklefs, 1988: 3-13).

In the period c. 1630 – 1800CE, the VOC entered into alliances with the local elites in order to gain control of the resources of the archipelago but in doing so, weakened itself financially so that by the end of the 1700s, it was bankrupt. In the new century, the VOC was dissolved and its powers devolved to those of the Dutch government. In Batavia (Jakarta) in the early days of the Dutch presence in the archipelago, VOC employees (dienaren) entered into relationships with local women to form family and business alliances. This was because very few Dutch women came to the colony and, in fact, the VOC administration encouraged men to form partnerships so that they would stay longer in the new colony. In the lower ranks of the army, however, the soldiers’ children (soldatenkinderen) sometimes ended up in orphanages because the men were not permitted to take local wives and their offspring back to the Netherlands at the end of their contracts. In the higher ranks, officers even kept harems of mistresses and this added to tensions with local princes.

By the mid-1800s, most Indo-European families considered the Dutch East Indies as ‘home’ and had a distinct set of cultural mores that were different from Dutch people in the Netherlands. For those who were wealthy, their social status was virtually equivalent to Dutch citizens in the fatherland, but for metis (mixed) families of lower socio-economic standing, discrimination on various levels was quite apparent. Within a paternalistic colonial ethos, all women were second-class citizens, though in colonial novels white women were portrayed as moral saviours, whilst Indo women were depicted as being morally degenerate.

The tripartite racial policy (essentially) grouped people into ‘European, Native and Foreign Oriental/Chinese’ (Wiseman, 2000: 1) and ensured legal and economic discrimination. Most Natives/inlanders were poor, very few educated and idealistic notions of more universal education fell very short of the mark in practical terms; only the wealthy in the society could afford to send sons to the Netherlands for higher education. After the mid-nineteenth century, noticeable changes occurred in the society which meant that some Indo-European families would find their situation more difficult economically, educationally and socially – as totok (newcomer) Dutch arrived to take up employment opportunities in the colony, aided by vastly improved transport networks after the opening of the Suez Canal (1869).

From 1830 – c.1870, the governor-general Johannes van den Bosch introduced the Cultuurstelsel (compulsory cultivation period) with the purpose of making the colony more profitable. This system was primarily implemented in Java and meant that villagers had to turn over part of their land for the production of government crops or work a portion of the year on government plantations. Living conditions worsened for some Javanese farmers – with famines occurring in Cirebon and Central Java as cash crops took precedence over rice production.

The Ethical Policy articulated in 1901 by newly crowned Queen Wilhemina (1890 – 1948) was a case of ‘too little too late’ for most of the Natives/inlanders peoples of the colony – though it did improve education in a marginal way; in 1928, 75,000 ‘Natives/inlanders’ had completed primary school education (Wikipedia, 2013) – still a very small percentage of the overall population. Rather than ‘a civilising mission’ (as other colonial powers had called similar policies), the Dutch government sought to improve material living conditions for its colonised peoples (Wikipedia, 2013). Unfortunately, lack of funds and lack of will by the colonial administration in the Indies meant that although the policy still existed until the Japanese occupation, its effectiveness was virtually nil after the Great Depression in 1930 (Wikipedia, 2013).

In the twentieth century, the rise of independence movements brought the idea of an independent Indonesia into the public arena – an idea that was conceptualised differently by various political groups in the society – at a time when the pressure on Indo-Europeans to perform a ‘Dutch’ identity was growing. Founder of the short-lived Indische Partij, Indo activist Eduard Douwes Dekker – grandnephew of the author of Max Havelaar – wanted an inclusive Indonesian state where all those who felt a sense of belonging would be included on an equal basis; others, such as Sukarno  (Kusno Sosrodihardjo 1901 – 1970), wanted Indonesian citizenship to be more narrowly (and ethnically) defined.

World War II and the Japanese occupation was a turning point for all those from Indo-European families, the totok Dutch, the Christianised Ambonese and others seen to be closely aligned with the colonial authorities. The incarceration of people at the hands of the Japanese marked an especially cruel chapter in the history of the Dutch East Indies. The Bersiap (genocide) at the end of World War II was another difficult period for Indo-Europeans (and others); and expectations of early rescue by the Americans proved disappointing as revolutionary violence took hold. Dutch ‘police actions’ created more brutality – as colonial authorities tried to win back territory lost to freedom fighters.

Sukarno and Hatta declared Indonesia ‘merdeka’ (independent) on 17 August 1945, and the archipelago then became known as The Republic of Indonesia – though it would take another four years of conflict for the Dutch government to officially hand over sovereignty to the new nation on 27 December 1949. After World War II, many totok and Indo European families left the country – with more departing in the late 1950s. In the 1960s, after initially relocating the Netherlands, some took the further step of going to the United States, where they made a new life in various parts of the country – depending on where their sponsors were located.

Today, the internet has facilitated communication between and among members of the world-wide diaspora which spans the USA, the Netherlands, Canada, Australia, New Zealand and Israel. Because of today’s communications environment, younger generations in the diaspora finally have the chance to ask questions and seek answers to the mysteries of their families’ historical past in Indonesia. The next chapter of this brief history will offer a background to life in the archipelago before the arrival of the Dutch. After that, the arrival of Europeans marks the beginning of social change that disrupts traditional village life and brings into being a new group of people with family ties to both indigenous and colonial society.