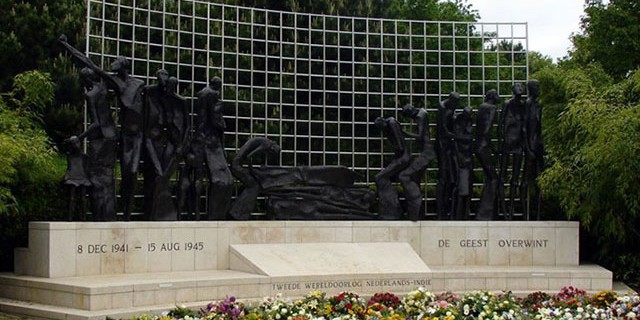 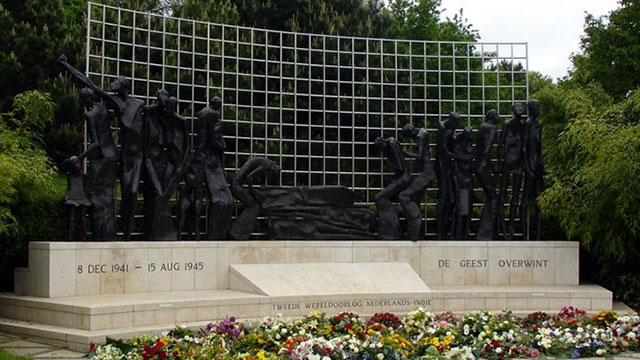 While many of the actual WWII victims are in the winter of their lives, many of them were never properly reimbursed for the damages (material and otherwise) they suffered during the war: this involved loss of property, loss of bank accounts, life insurance money and the loss of beloved family members. This also included the cost of repatriation, the money that had to be paid back to the Dutch government for offered refugee care, and for some, the subsequent costs of repatriating again to countries such as the US, Australia, South Africa and elsewhere. The so-called “Indische kwestie,” which is a mere token gesture to resolve this once and for all, has been dragging for years but was recently pushed under the rug again. With a Dutch government, the chances of the Indo Dutch community being fully acknowledged and reimbursed (on some level) become slimmer and slimmer as the governments of the future will have fewer connections with this colonial history, and the Dutch electorate may care even less for unfinished business that has been left unfinished for more than 70 year.

Due to all sorts of reasons, Japan has been whitewashing war crimes, atrocities and still flat out denies the use of so-called comfort women, many of whom didn’t officially testify until the early 1990s. Since then, the Japanese government and conservatives have vilified these victims as “whores”, whose testimonies can’t be trusted because they are whores and thus these women are getting marginalized even further and will probably never hear an apology from the Japanese government before they die. While the Dutch archives hold many of the testimonies of these women from right after the war, these archives are still classified due to reasons of privacy but the unintended consequence of that is that this history remains buried and unverifiable for scholars in years to come. What’s more, the Dutch government has done little in recent years to stand up for these comfort women when in fact it holds all the evidence and burden of proof.

While countless of movies have portrayed and retold the story of the Holocaust, the stories about the camps in Asia (80% of which found themselves in the Dutch East Indies) are few and far between, with only one major movie coming out of Hollywood (Paradise Road).

In the recent rapprochement between Japan and the US, which is not just about trade relations but Japan’s return to the building up of an actual military, Japanese Prime Minister Abe tried to tell US Congress that yes, the war did happen but he showed little contrition, and if so, only the US POWs have been mentioned, like in the UNESCO naming of World Heritage Sites in Japan where POWs were forced to work for Japanese companies or in the recent announcement that Mitsubishi will apologize to US POWs, even though there were more Dutch POWs at these sites.

I apologize for painting this very bleak picture but one may well come to the conclusion, as Minister Marga Klompé (in charge of relief care for the Indo Dutch population, coming from the Indies after the war) already did in the 1950s, namely, that ‘De Indische Nederlanders zijn geofferd voor de grotere belangen’ (The Indo Dutch population has been sacrificed for the greater interests). This same population had contributed to and made possible the great colonial wealth, which ended up in the Dutch government’s coffers before the war.

It’s a story of David and Goliath, but The Indo Project, however small we are, believes that it needs to keep all of this history alive, in the public eye and we need to protect the truthfulness of this history against the onslaught of historical revisionism coming from Japan.

In many ways, there is a sense of stonewalling coming from both the Dutch and the Japanese government when it comes to the acknowledgment of damages and suffering of the war in Asia. The only real monument to the war dead in Indonesia are the war cemeteries which are run by the Dutch government agency De oorlogsgravenstichting, but the cemeteries are not sustainable, they are sitting on expensive real estate and are being visited by few, while being mostly ignored by the Indonesian population. In light of governmental austerity, De oorlogsgravenstichting will also be struggling in years to come, as the government has told them that they need to do their own fundraising rather than rely on the customary subsidies in years to come. What will happen with these war graves of our relatives when they become too expensive to maintain or hold onto? I can see the bulldozers coming in, and with it, a further chunk of our history will be wiped off the map.

So where do we go from here?

Maybe we need to think outside of the box.

I have talked about the Netherlands and Japan, but Indonesia was the setting for this conflict and humanitarian disaster. While Indonesia and the Indonesians were just as much a victim of the Japanese occupier, they actively and aggressively engaged in the Bersiap, the period of lawlessness that ensued in the power vacuum after the war. Thousands of civilians (Indo Dutch, but also Dutch and Chinese) were brutally murdered by Indonesian freedom fighters whom Sukarno and others could not control.

In the 1950s, the Dutch government looked into these genocidal killings but blamed others (the Japanese, the Indonesians and the British troops, the latter of whom were underrepresented due to failed Dutch and British intelligence, underestimating the volatile situation on the ground). Yet the Dutch government washed its hands in innocence and wrote these civilian victims off as collateral damage… but it did happen on the Dutch’s watch, right, as the Dutch would not concede the colony until 1949. However, I know of no lawsuit from any of the victims, many of whom were too shell-shocked by the whole experience and were ready to rebuild their lives in the 1950s, without looking back to these traumatic times. Yet the experience of great trauma lingered in these families and scarred further generations. I once got a letter from a man who was born in 1945, in the Netherlands, right after his family had returned from the Indies; he told me that while he had never been in the war in the Indies, he was suffering from camp syndrome and PTSD, too, because growing up, he had been surrounded by people who had been in camps and the Bersiap, and the experience was inherited through some sort of transference.

But wait: as late as 2005, the Dutch government officially (and finally) acknowledged that 1945 and not 1949 was the date of Independence for Indonesia. This means that my relatives and all others who died after August 17th, 1945, died on the watch of the Indonesians, and that Sukarno was culpable when it comes to not being able to restrain the population whose rage during the revolution in Surabaya has been compared to the blood thirst of the French Revolution by witnesses and historians. Many also believe that, to Sukarno, the mob factor had a function and it did, because the revolution in Surabaya was bloody enough to finally get the world’s attention, i.e. the awareness that something serious was happening in Indonesia. So, could we as relatives of Bersiap victims sue the Indonesian government, or at least, demand acknowledgment of these crimes? The pemudas who killed women and children were seen as freedom fighters and national heroes and as far as I know, none of them were persecuted for their crimes.

This is a can of worms for sure, and historians in the Netherlands are always quick to point out that the Dutch had exploited and extracted so much wealth, but also, committed so much genocide in our shared colonial history, that it is preposterous to ask for justice for these victims who were “colonizers” after all. In other words, Dutch historians have written off these victims as collateral damage, too, but that doesn’t make it right for the families or my great-aunt, who returned to the Netherlands in 1945, without a husband (tortured and killed by the Kempetai) and without her two teenage daughters who were hacked to pieces during the Indonesian Revolution in Surabaya while they were being evacuated OUT of Indonesia…

Lawsuits. Reparations. Yes, maybe, they are preposterous in the total context but this is where transitional justice may offer a form of dialogue between Japan, The Netherlands, and Indonesia, in which the victims can go through a truth and reconciliation process which might bring openness and closure at the same time, with regard to a history that has been silenced, denied, whitewashed, and, if this trend continues, may well be forgotten in 2040, the year of the 100th anniversary of the beginning of WWII.

When I talked about this idea with two historians at the War Archives in Amsterdam, they said it was naïve. Yet, truth and reconciliation happened very successfully in an even greater can of worms, i.e. South Africa, and something similar is now also going in Argentina. If we say we can’t do it, we are like The Netherlands and Japan, two countries that don’t seem to want to look back and acknowledge the victims fully, or in case of the comfort women, not at all.

With your help, The Indo Project will continue to work on the possibility of a global center for Indo Dutch culture which would also offer a platform for truth and reconciliation, so our history is not only preserved and protected but also heard and shared with the other countries, so that we, as Indo Dutch, Dutch, Indonesians and Japanese can learn from these experiences, come together as a world community and fight for global peace.