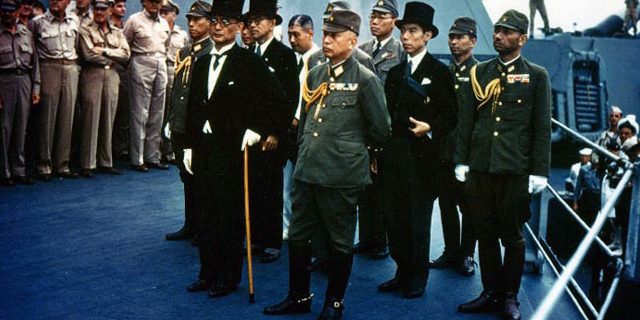 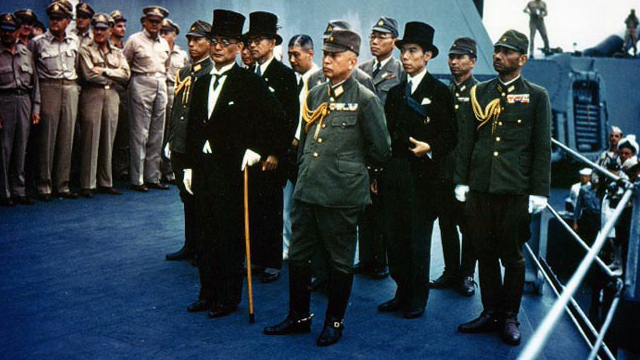 Although the end of Japan’s WWII occupation of the former Dutch East Indies is celebrated on August 15th (V-J Day), it was on September 2, 1945, more than two weeks later, when the official ceremony of Japan’s unconditional surrender to the Allied Forces was held on the United States Navy battleship USS Missouri.  It marked the end of WWII in the Pacific and with that came the release of many of the prisoners of war held in Asia by the Japanese.  Many of them were barely alive and saved from death in internment camps in the nick of time.

The actual ceremony can be seen on this YouTube video.  Additionally, this link takes you to a restored copy of what is believed to be the only publicly available color motion picture taken of the Japanese Surrender in Tokyo Bay on September 2, 1945.

The following information is courtesy of the Online Library of the Naval History and Heritage Command.

In charge of the ceremonies was the Supreme Commander for the Allied Powers, General of the U.S. Army, Douglas MacArthur, with Lieutenant General Jonathan M. Wainwright, defender of Bataan and Corregidor, and Lieutenant General Arthur E. Percival, British commander at Singapore.  Both generals, recently released from a prison camp near Mukden, Manchuria, had been especially invited by General MacArthur to witness the surrender of Japan. Other signatories for the Allied Powers were:
For the United States – Fleet Admiral Chester W. Nimitz.
For the Republic of China – General Hsu Yung-Chang.
For the United Kingdom – Admiral Sir Bruce Fraser, GCB, KBE.
For the Union of Soviet Socialist Republics – Lieutenant General Kuzma Nikolaevish Derevyanko.
For the Commonwealth of Australia – General Sir Thomas Blamey.
For the Dominion of Canada – Colonel Lawrence Moore-Cosgrave.

The following links provide more pictures of the 2 September 1945 Japanese surrender ceremonies. Pages, and the photographs they present, are organized in approximately the order that the morning’s events transpired: