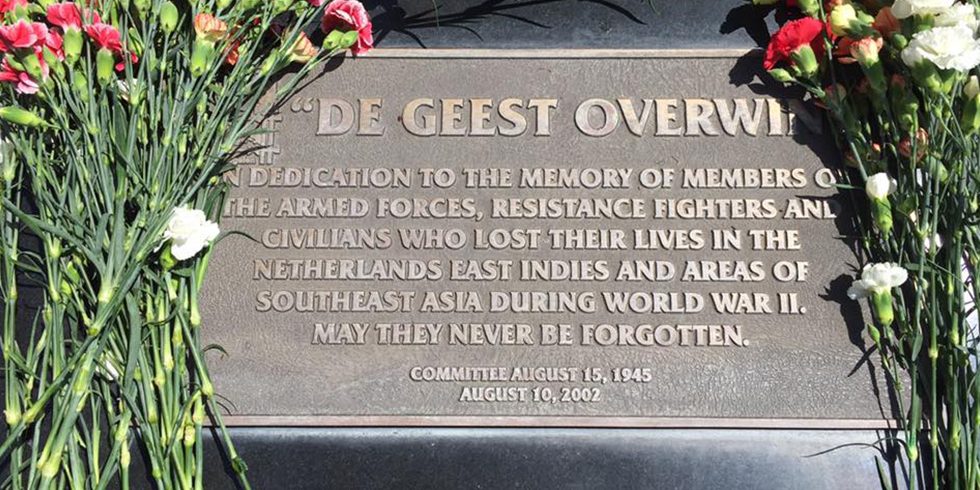 The vast majority of the people who come to commemorate at the Dutch East Indies monument in the Netherlands today have not experienced the war. But young people also find it important to commemorate the war. They are becoming more aware of their Dutch Indies background. For example the response of one of the younger Dutch attendees: “I am here mainly to remember my grandfather and grandmother, who both survived the war, but they always carried it with them.”

The committee August 15, 1945 in Los Angeles revealed the new monument on August 10, 2002. Every year people lay flowers on this monument to honor the memory of those who lost their lives in the Netherlands East Indies and areas of Southeast Asia during World War II.

The renewed set-up of the LA Dutch East Indies commemoration on August 11th is meant to also have the younger generations with Indo Dutch roots to visit the remembrance ceremonies. This way they learn about an important time in Indo Dutch history so many grandparents and parents did not want to talk about.

What we see within families here in California for example, is that a lot of information about Indo heritage had not been passed down to younger generations in the USA. Focus has been more on being an American. Also, not many speak or understand the Dutch language – then a lot of knowledge is not available or is lost. Because of the internet and social media more information has become accessible and allowed for people to  (re-)connect. We see younger generations with Indo heritage now showing more interest in Indo cooking, coming together at kumpulans and the Holland Festival and showing their pride by wearing SoCal Indo shirts for example. By making people more aware about the annual remembrance ceremonies or our Indo memorial day, we might spark a similar interest. People are showing to be more willing now they have become made aware. So with reference to showing respect and honoring those who lost their lives, children will understand our Indo Memorial Day in the context in which we present it. It’s also a social responsibility as a community to create awareness. We owe it to both those who have honored our lives with great sacrifice and to children to let them know that our remembrance day means much more; a celebration of the freedoms that we enjoy, an act of gratitude and a way to preserve a vital part of our Indo heritage. So spread the word!

“We should talk about the ceremony and tradition we have here today at the Los Angeles National Cemetery. When we do ceremonies here at your LA National Cemetery we like to think of the word tradition, we want to honor, we want to remember and we want to teach. And if those elements are part of the program, we have a successful program. What I wish we  would do more of,  we need to teach our young people about the past. Because once the past is gone, it is gone forever.  I want to thank you for all for coming and I also want each and everyone of you to take one message back with you, and that would be please, teach your young about what we are doing here today and bring them back to this event. Without it this event will be gone and will be lost forever. And it is too important, we must remember, we must honor and we must teach.”

Augie Mensink was presented a certificate of appreciation from the department of Veteran Affairs by Thom Ruck:  …for his many years of dedication ‘de geest overwint’ remembered with sincere appreciation,  we acknowledge your spirit of pride and patriotism.

“…My role here is to articulate the connection and the deep respect that the Dutch Government and the Kingdom of the Netherlands have for the Wapenbroeders, who have been meeting here for many years to commemorate those who fell during the Japanese invasion and occupation of Dutch Indonesia. Remembrance is a privilege given to us by those who fought for us and it is also our duty to them and to the past.  The international nature of this event reminds us that free people must always join together to prevent tyranny, for freedom and hold on to the right to remember the past with honesty and compassion…   …The wapenbroeders and all of us remember this painful past, not with acrimony but with honesty and  understanding. It’s our duty to remember and commemorate those fallen and cherish the opportunity to meet here today in this beautiful place, in peace and freedom. Time is passing and the world is changing but our shared history and collective memory is an important part of who we are. And we hope we can pass that along to our children and grandchildren. The Past and its wounds belong to us. They are part of our history. Wounds may heal but they leave scars. Remembering the past brings comfort but do not erase.”

The keynote speaker at the ceremonies was our Eric Morgan (TIP board member). This is one quote of his touching speech:

“…just like the great majority in the Indo Community, who have successfully, yet quietly assimilated into the U.S., we tend not to be comfortable in drawing attention to ourselves. But in the case of our Indos who endured the Diaspora, the War Camps… the sun is setting upon this 1st generation. We must honor them while they are still here with us. The Herdenking Ceremony is THE means to demonstrate our respect and reverence for them…” 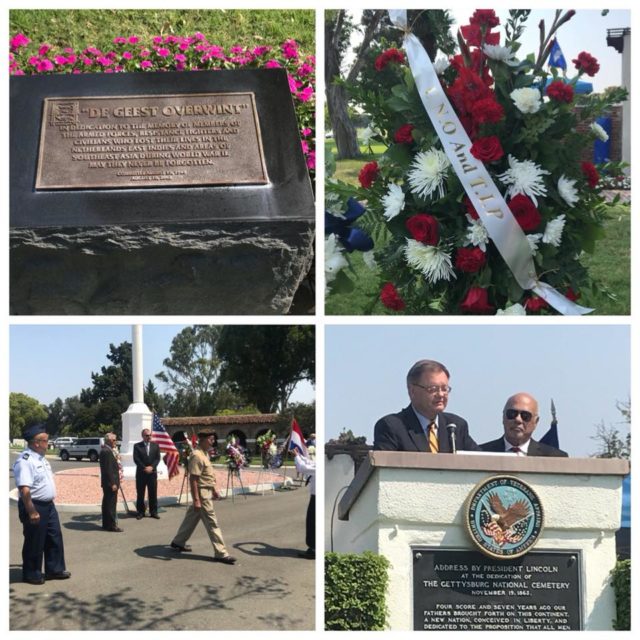 John von Bargen, sang the beautiful song the Anchor Holds. As song about a person that went through life and who is looking back at his life. What dreams materialized through hardship and what did not.

The choir sang their beautiful hymns. Miss An Schoew sang the Lords’ Prayer.

After that ‘het luiden van de klokken’. The placing of the wreaths and the flower tribute to the monument.

Organized by Mr. Auke Mensink, President of the committee of the Netherlands Veterans Organization. 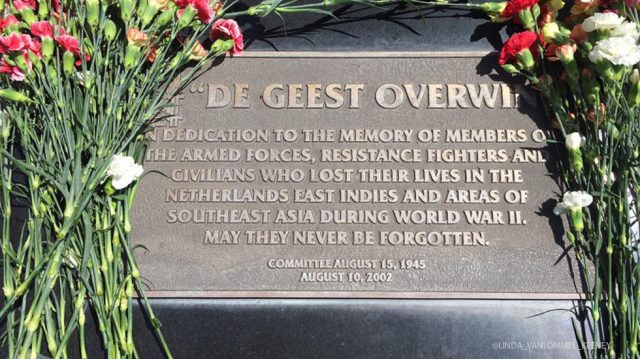 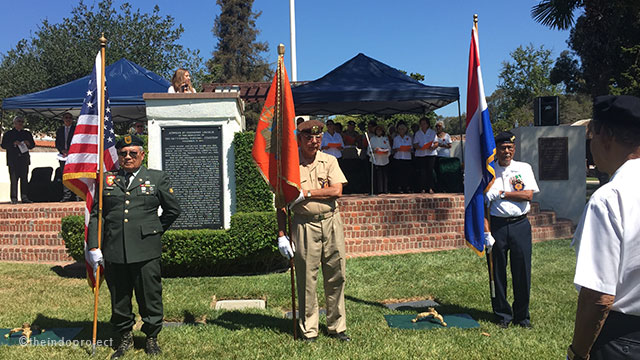